TOOLS. Fantasy tools that are so simple and effective that anyone can begin winning immediately, whether season-long or DFS.

RosterWatch, based in Austin, Texas, is the only fantasy intel source with in-person coverage of the entire offseason, giving you a serious leg up on ALL of your competition. They are there, on the ground: Senior Bowl, NFL Combine, University Pro Days, NFL Training Camps – Alex Dunlap and Byron Lambert are the experts on the scene, and The Trashman is your secret weapon. RosterWatch covers it all, and this means the best fantasy football tools on the planet.

Now an industry standard, they created the Touchdown Dependency Metric back in 2011. And, their industry-first “Vegas Tool” delivers weekly fantasy picks from an exclusive network of Vegas insiders.

A simple-to-use, complete suite of tools, RosterWatch PRO is designed for the elite fantasy football player, who wants expert results in just a matter of minutes per week. RosterWatch tools take players day by day and week by week through the fantasy season, from the draft all the way to the championship. The only company dedicated to personally covering and analyzing fantasy football every day of the year, RosterWatch.com are “the rookie experts.”

Join their lively football community for the maniacal analysis 24/7/365. Welcome to RosterWatch Nation!

RosterWatch is an “Approved Expert” on the FantasyPros.com network. You can also find us on Twitter and Facebook. 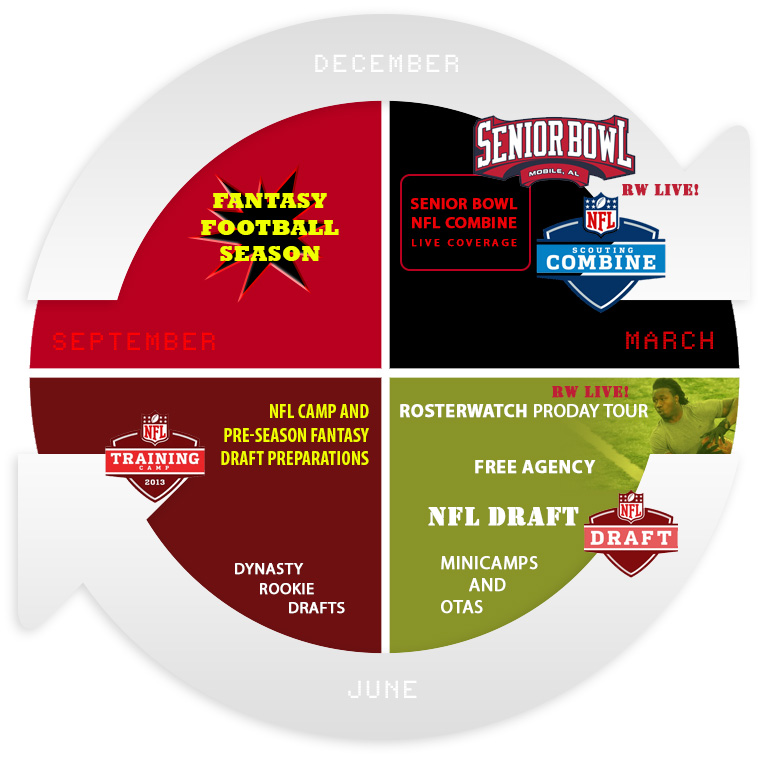 Although we’re known primarily for 24/7/365 NFL intelligence and analysis, RosterWatch Inc. also offers a wide range of products and professional services for sports and entertainment organizations. How can we help? Learn more at rosterwatch.biz. »

RosterWatch is on the move. Our visitor base keeps growing because of the exclusive content we offer and our exposure through a broad spectrum of media: Website, Twitter, YouTube, Facebook and of course, the RosterWatch SiriusXM radio show. We work with our sponsors to ensure the absolute best execution and measurable ROI.

Contact us today to discuss cost-effective interaction with the world’s most devoted sports fans.

Fifteen Things I Learned at the 2019 NFL Combine, by Matthew Berry

“With so many coaches and so little time, I had help covering everything. In addition to my ESPN teammates mentioned above, I want to give a special shout-out to Byron Lambert and Alex Dunlap of RosterWatch.com. I’m huge fans of these guys and they do an amazing job year round, but especially in terms of rookie scouting. As I’ve mentioned before, I was so impressed with them at the combine that I went up to them, introduced myself and begged them to let me do business with them through my RotoPass website. Definitely a great follow on Twitter and on their site.”
READ THE ARTICLE ON ESPN.COM »

Fifteen things I learned at the NFL combine for fantasy football 2018, by Matthew Berry

Organizations partner to collect and distribute real-time performance data from pro football draft prospects throughout the week of Senior Bowl practice, to benefit teams, football fans and the media.

MOBILE, Ala., Jan. 25, 2017  — RosterWatch, a leading independent pro football player-analysis and fantasy football intelligence company, today announced a partnership with The Reese’s Senior Bowl and Catapult to provide real-time player performance data from the week of practice – January 23-27 –immediately preceding the Senior Bowl event on January 28. This co-operative venture aims to dramatically expand the pool of pro football draft-prospect data available at this point in the pro football calendar.

This cooperative program will benefit pro scouts, who increasingly rely on fine-tuned player analytics to grade each player and predict future production on the field. The teams will also see safety-related benefits, as the detailed data helps them gauge the health effects of the week’s work outs, with accurate measurements of individual player loads. Football fans and the media will also have access to more in-depth metrics for aspiring pro football rookies than ever before, during broadcast and throughout the 2017 pre-season.

“The Reese’s Senior Bowl is very pleased to partner with RosterWatch and Catapult to bring player performance measurement technology to our annual event,” said Phil Savage, Executive Director of the Reese’s Senior Bowl. “The Senior Bowl is the traditional launch of the draft season and we feel that advancing the player insight available to fans, scouts, players, coaches and media enhances both the entertainment and informational value for everyone involved.”

“The Senior Bowl presents a unique and exciting opportunity to legitimately showcase the future of technology for football,” said Brian Kopp, President of North America for Catapult Sports. “We’re excited to put Catapult wearable devices on every player throughout the entire week, as well as work closely with the XOS team to provide coaches and scouts the ability combine tactical and performance data from complementary technologies for the first time.”

“RosterWatch analyzes player performance to help pro football fans understand and predict player productions, and so participating in the Senior Bowl is a trip that we always look forward to as our most important research of the year,” said Byron Lambert, CEO of RosterWatch. “We’re thrilled to partner with the Reese’s Senior Bowl and Catapult to help grow the footprint of this event in the months leading up to the draft. The performance data gathered in Mobile will help fans, teams and the league in their understanding and enjoyment of the 2017 season, starting in January.”

Catapult enlightens sport with scientifically-validated analytics, obtained with the most advanced wearable technology in the world. With precision engineering at the intersection of sports science and sports analytics, Catapult works with over 900 elite teams worldwide to innovate how information shapes athletic performance. With over 250 performance metrics, Catapult’s powerful analytics engine enables personalised value in the mitigation of risk of injury, measuring readiness for competition, and quantifying return to play. Catapult is based in Melbourne, Chicago and Leeds. For more information, visit www.catapultsports.com.

RosterWatch Inc., based in Austin, Texas, is an independent provider of year-round pro football player analysis and fantasy football intelligence. Its partner-analysts are sports performance experts with academic preparation comprised of six combined degrees in various methods of statistical evaluation and game theory, and over 50 years of fantasy sports and gaming experience. RosterWatch entertains an international fantasy sports audience via their weekly radio show on SiriusXM Radio, and is an “Approved Expert” on the FantasyPros.com network. On the web: www.rosterwatch.com and www.twitter.com/rosterwatch.

RosterWatch also announced today a $5,000 tournament win on a major daily fantasy website by a RosterWatch user, Dustin Daniels of Austin, Texas. RosterWatch’s Ultimate Cheat Sheet gave him the critical picks he needed to win. “I love the RosterWatch site and articles for my fantasy football leagues and daily fantasy games,” remarked Dustin. “The weekly matchup tool is my favorite and I use it for everything: Single week, standard, and with the sports book. For example, I couldn’t believe their Doug Martin pick but added him to my season-long teams and guess what? Last week he totally came through. It was an amazing call!”

“We are thrilled to once again reach the very top tier of FantasyPros.com’s expert rankings,” added founding partner Alex Dunlap. “But it’s even more gratifying to see our users win large daily fantasy games. RosterWatch provides a statistics-driven inside edge that helps our users come out ahead consistently, whether in daily fantasy or season-long leagues.”

RosterWatch Inc., based in Austin, Texas, is an independent provider of year-round NFL player analysis and fantasy football intelligence. Its partner-analysts are sports performance experts with academic preparation comprised of six combined degrees in various methods of statistical evaluation and game theory, and over 50 years of fantasy sports and gaming experience. RosterWatch entertains an international fantasy sports audience via their weekly radio show on SiriusXM Radio, and is an “Approved Expert” on the FantasyPros.com network. On the web: www.rosterwatch.com and www.twitter.com/rosterwatch.