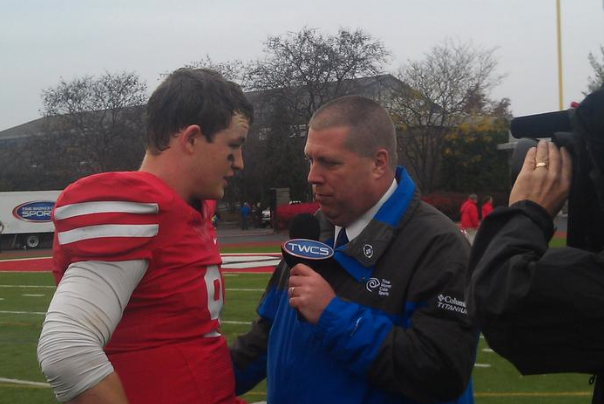 Don’t let the fact that Mathews plays in the Ivy League fool you. This Bruin has excellent touch on his passes along with good arm strength. Due to his sound mechanics, including his throwing motion, setting his feet, and hip rotation, Mathews’ throws seem effortless given the quick nature of his release. Since he is using his body’s momentum, Mathews doesn’t have to put as much force behind his arm. While the arm talent is definitely there, questionable pocket movement may hurt him a bit. Mathews doesn’t move around the pocket as efficiently or effectively as he should. Fortunately, his vision and decision-making are superb, and help make up for his lack of movement in the pocket.

After stints at Nevada, Wyoming, and Monterey Peninsula Junior College, Fales finally ended up at SJSU for his Junior year and became the starter. The placement and precision on some of his passes are simply jaw-dropping, especially his back shoulder throws. The big question circling Fales has been his arm strength. It’s not so much his actual arm that is the issue, it is his lack of hip rotation that is a current hinderance to his overall game. Thus, Fales doesn’t get as much momentum and natural force as other prospects. Fales’ movement in the pocket while keeping his eyes down field is stellar. He shows a natural calmness in the pocket. With this skill set, he is the ideal prospect for a West-Coast Offense.

While he was recruited out of high school as a dual-threat QB, Morris was molded to be a pocket passer with above-average athleticism, a mix we have seen NFL clubs begin to covet greatly. The natural arm talent and strength seen from Morris is arguably the best in the class, but he’s holding himself back. Morris rarely sets his feet and follows through with his throws which often leads to inaccurate passes, even on short throws. His pocket presence is mediocre, at best. Morris rarely steps up into the pocket to gain time. Instead, he’ll move outside and bail the pocket too early, often leading to a broken play. Considering his natural abilities, improved mechanics could put him as high as the No.1 rated Senior Quarterback.

Renner is my sleeper QB, in terms of Seniors. His arm strength is solid, along with impressive touch and placement. He knows right where to put the ball so that only his guy has a fair chance at the ball. Unfortunately for Renner, his wide receivers often failed to hang onto the ball, even though the placement was on point. Renner’s deep ball raises a bit of concern, but more due to lack of attempts airing it out. He doesn’t throw an awful deep ball, although it isn’t great. It appears he doesn’t trust his wide receivers, and rightfully so. Renner tends to read defenses well, save short zones across the middle. He tends to try and force it past them and it just doesn’t work. His overall pocket presence—meaning his calmness, awareness, movement and footwork—is above average other than his wide base, which may lead to a drop in arm strength and accuracy.

I know, I know, the LSU game, right? Well, that is not the same Tajh Boyd we saw throughout the season. Other than his great deep ball, zip, and above-average mobility (more power than speed), there actually isn’t too much too like about Boyd. His overall pocket presence is rather solid, but his passing skills are not what they are hyped up to be. With routes over the middle, Boyd struggles with timing and often forced passes he simply shouldn’t have. Against Duke, Boyd threw two interceptions into the exact same coverage—just on the other side of the field. Boyd’s value should be increased for vertical offensive teams.