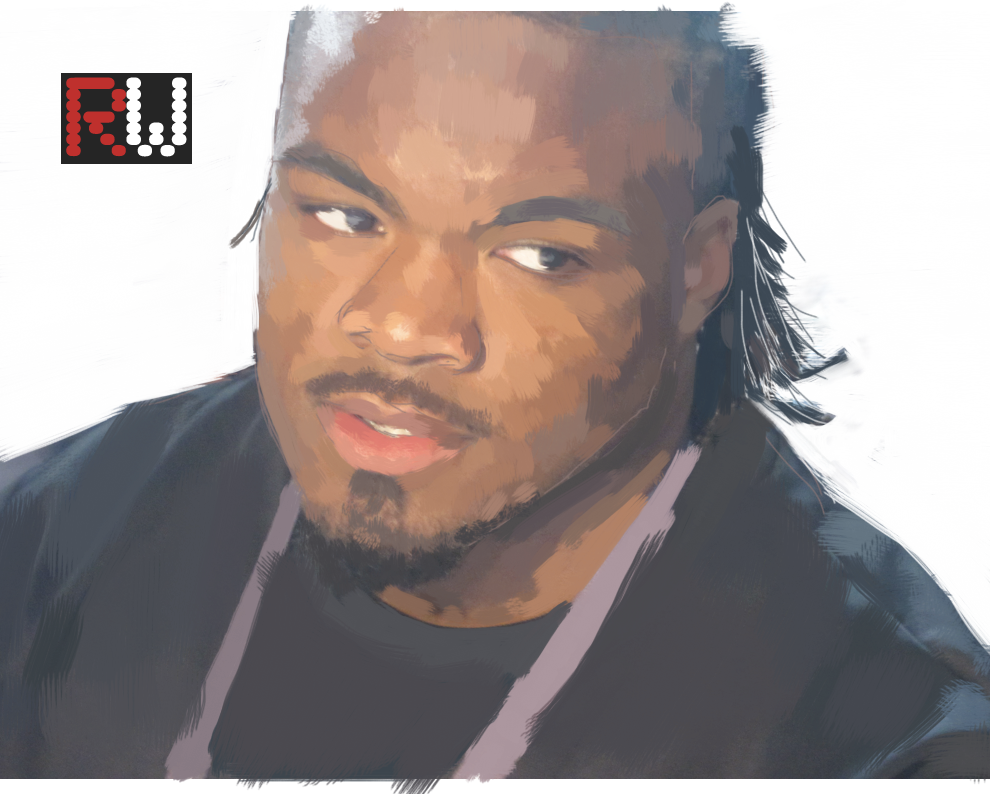 When I interviewed Memphis DT/NT Dontari Poe at the Combine, I was literally scared for my life. The man is a monster, and you don’t realize his absolute enormity until you are standing right next to him. His biceps alone were the size of my upper legs, and I am not a tiny dude.

Neither is Poe. But all 346 pounds of him turned in a sub-5 second forty time and pounded out 44 reps of 225 on the bench press in Indy. He reminds me of a more athletic Casey Hampton, and when I asked him about the comparison, he loved it. You should have seen the smile on his face. Although lately, as I have watched more tape on Poe, I believe he has the skills and attributes as a prospect to be even be more of a Vince Wilfork-type player. A dominating, penetrating, yet surprisingly versatile cog in the middle of a defense. The type of nose or 1/3-shade that can make an average linebacking corps look like All-Pros. He told me he was even comfortable at a 5-tech, and honestly- I believe him. Watch his film and check his feet. I honestly think he could handle QB contain on a right tackle’s outside shoulder. That is just crazy given his size.

With Defensive linemen- you always have the “fat boy” factor to worry about. It seems like every year, there is at least one DT among the top selected who eats his self out of shape, can’t stay conditioned, or simply becomes a lazy “on/off switch” player. A Shaun Rogers-type. A guy with all the ability in the world who only plays when he wants. While I understand this, I don’t understand how pundits would logically label this concern as one with which we should worry ourselves in regards to Poe. Generally, lazy fat boys don’t show up and do what Poe did at the Combine. That shows work ethic, and any scout will tell you that how you prepare for draft season is a HUGE indicator their staffs use in projecting adaptability to the physical demands of NFL preparation and execution processes when this becomes your day job.

If you turn on the tape, two things can’t be denied.
1) Memphis was a horrible defense last year. I think they got a few people fired they were so bad.
2) Poe was a diamond in that rough, constantly (like constantly) facing double teams and sometimes triple teams. He was still a run-stopping force and never showed any uncharacteristic lack off motor other than at times appearing gassed (just like every other defensive linemen in the NFL will appear multiple times during games.)

I understand that LSU’s Michael Brockers is a beast as well. It it isn’t often you see a man with arms this long use them in such explosive fashion- and I was quite scared standing next to him as well:

But Poe just has “it”. His bend, lateral ability, and most impressively- the degree control over his center of gravity indicating tremendous core strength were so evident that scouts called his workouts “Suh-Like”. I feel it was enough to single-handedly answer all of the questions people may have had regarding Poe as a prospect. There are a few, and I could address them, but I feel like Dontari did a good job on his own of doing so at his combine media interview: (He was one of the more intelligent, confident players I had the opportunity to interview, and sources with 2 teams told me he was great in team meetings.)

Drills at combine – I’m doing everything. It’s just competition. I like it. I like it all. I’ve been working out for it and just thought it’d be a good idea to do it all.

Working out – Competition and I’ve been training at API in Arizona. I feel pretty good about it.
I’m not hurt. I don’t have any injuries.

Interviews – I haven’t really talked to anyone yet. I’ve just been focusing on this day, on the combine.

Any idea which teams might have an interest – Not yet. I’ve just been focusing on this aspect. I’m thinking that will work itself out.

Compared to Casey Hampton – It’s a great feeling because everyone knows he’s a great player, Pro Bowl-caliber player. He has been for a long time in the NFL. To be compared to him is a positive.

Type of DT in the NFL – I see myself as someone who can rush the passer a lot more than people think. I am used to playing nose tackle and the 3-technique and I’ve played some 5-technique. I’m pretty comfortable anywhere on the defensive line.

Type of player – I think I’m explosive, very explosive. That’s probably my biggest strength. Most people think just because I’m big I do nothing but power (inaudible) you, things like that. I try to use my quickness to my advantage.

Important for a DT to rush the passer – Yeah. It’s become more important because the NFL is becoming a passing league. But if you can’t stop the run you’re in a pretty bad situation. You have to be able to do both.

What do you need to work on – Just overall consistency. I need to maintain my level of play throughout the course of a whole game. That’s probably the biggest thing.

Other D-tackles – Him, I like Ndamukong Suh. I think he’s very aggressive. Haloti Ngata. A lot of defensive tackles in this day and age are very good, which forces us to kind of step our game up.

Playing in a 3-4 or a 4-3 – Really I’m used to both. We played both in college. Either or would probably be good for me. I’m comfortable playing either or. It’s really not a big deal.

What do teams want – I don’t really know yet. Most people kind of see me as a 3-4 nose tackle, which is cool with me because I like that position as well. I like to think that I’m versatile and I can play multiple positions.

5-technique experience at Memphis – In all our three-downs ’cause our end got hurt. It forced me to move out. My coach told me I had to learn the position. It felt pretty comfortable. It wasn’t anything abnormal. I’m pretty used to it.

Casey Hampton – He’s aggressive. He’s one of the more aggressive defensive tackles this league has seen. His hand strength. One he gets his hands on you, he kind of controls you. That’s probably what I admire most about him.

Combine/NFL always a dream? – Yeah. It’s always been a dream. Back in high school we used to look at it and think it was so far away. But now at the end of my college career and getting this opportunity, it’s a blessing and it’s a dream come true. But it’s also a job and a business. It has become a reality. I’m getting used to it as I go.

You know your way around a weight room – Yeah, a little bit. I love the weight room. It’s something I got into in high school because people always used to say college players are way bigger, faster, stronger. When you get to college, they say the NFL is way bigger, faster, stronger. I never let up on it. I’m self, intrinsically motivated to do it. Football is the most fun part about it.

Why Memphis – I’m from Memphis. Born and raised in Memphis. I kind of felt like it would be the best decision for me at that time to stay at home and go to that school. For my family to be able to see me play each and every Saturday I thought it was a blessing and it turned out to be a blessing in disguise.

Other offers – Yes sir I did. I got offers from the big schools, but some things happened and I chose to go to Memphis.

Hard to get noticed playing at Memphis – I think it speaks for itself. People say you have to go to a big school to get noticed, but the NFL is a broad league so they’ll find talent wherever it is. I didn’t think that was a big problem.

Possibility of playing with Houston Texans and Wade Phillips – It would be good, too. I’m here to play in the NFL. That’s my biggest thing.
It’s been a dream for so long that wherever I go I will work my hardest. I will give my all.