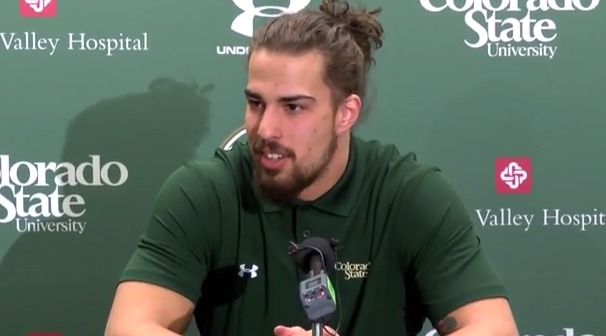 Scouting Report:
Crockett Gillmore is a big, rangy, athletic tight end. He dunks over goal posts after he scores touchdowns. Most importantly- he loves to compete. After impressing the week of the East-West Shrine Game, Gilmore was a late invite to the Senior Bowl. He was a huge upgrade over the injured player he replaced, TE Marcel Jensen of Fresno St. It was at Jacksonville’s urging that Phil Savage brought Gilmore down to Mobile mid-week. Despite the late start, Crockett Gilmore was clearly one of the best players at the event. He flashed early and often- only to go on and have a monster Senior Bowl game performance that had him in the running for Game MVP. The guy is a bona-fied playmaker. He has all the tools to be a solid blocker, as well. If drafted into a reasonable situation, Gilmore should quickly become an impact player. Don’t be shocked to see a good organization like New England, Baltimore, or Green Bay steal Gilmore in the middle to late rounds of the 2014 NFL Draft. He will also obviously be somebody for Jaguars fans to keep an eye on. We do not anticipate Gilmore testing well in explosive drills at the NFL combine, but believe he will excel during the on-field portions of testing.

Fantasy Outlook:
Put him on your Dynasty radars now! He’s already on ours. He will be a red-zone threat and a player that can produce receptions and yardage. Most importantly, he can block which means he has a chance to be on the field a lot. As a rookie, he will be capable of matching the production of more high-profile 2013 rookie tight ends such as Tyler Eifert and Zach Ertz. Long-term, he will be a great hold. We already put him in the running for a 2014 Rookie Trashman Favorite.

** Update 8/13/2014
As predicted above, back in February- Baltimore selected Gillmore in the middle rounds of the NFL Draft. Unfortunately, he is currently buried on the depth chart behind veterans Dennis Pitta and Owen Daniels. Gillmore isn’t currently a re-draft option. However, we still like his dynasty prospects in a Gary Kubiak offense. He’s a solid flier in dynasty rookie drafts for those who need to solidify their tight end depth.