Rookies To Keep An Eye On In Fantasy Football Drafts
Alex Dunlap, Rosterwatch.com 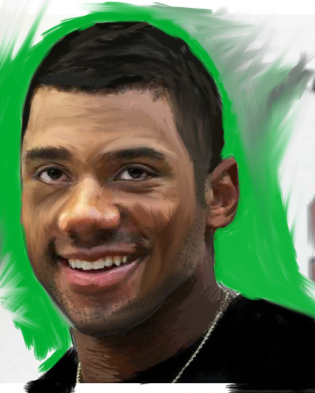 Fantasy draft season is in full swing, and everybody wants to know which rookies are going to pop out of nowhere to ascend to fantasy prominence. The guys you can get late in your draft and snake the competition before they become a household name.

Here, we have listed all skill position players taken in the 2012 NFL draft, and some undrafted rookies who we have reason to believe may have fantasy relevance in some form during the 2012 season.

The reason for the tool is to help fantasy owners in identifying what rookies to target late in drafts who could end up paying dividends. Fantasy football is about value, and there is quite a bit of value to be gained by having knowledge of players that many of your less-(obsessed?) leaguemates may not, simply because the names are not yet familiar to them.

I have broken players up into five tiers, which are represented in the graphs below that have been broken down by division.

BLUE: A player that should be owned in 2012 fantasy redraft leagues. Obviously, there is a difference in a player like Trent Richardson, who everyone knows will be an immediate fantasy contributor, and someone like Lavon Brazill, who should be owned, but not picked until very late in drafts. A designation of BLUE simply means that as of publish date, these rookies should be rostered in standard 12-team leagues.

LIGHT BLUE: A player that has a significant chance of making an impact in 2012 redraft leagues, but is not projected to have the same sort of production in 2012 as those marked in dark blue. Players with LIGHT BLUE designation represent excellent late-round value picks for upside in redraft leagues, but should be targeted mainly by keeper-league owners looking for a late-round keeper for next season.

GREEN: A player who has a marginal chance of attaining fantasy relevance in 2012, and not recommended for acquisition in standard 2012 redraft leagues. These are players who represent targets for dynasty owners for development on their taxi squad for one-to-two years.

YELLOW: A player who should not be drafted under any circumstance in 2012 redraft leagues, but represent a small amount of value as possible taxi squad and/or deep-roster consideration in dynasty leagues.

NO DESIGNATION: A player who is completely off my radar in all league types. 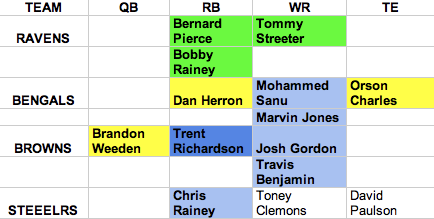