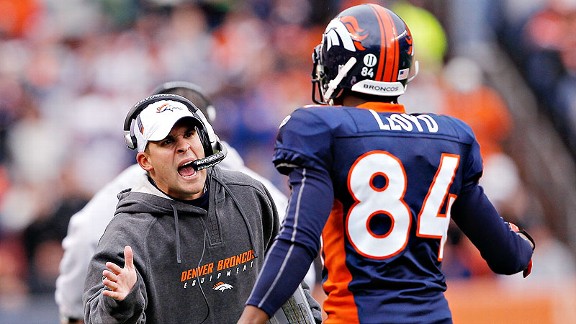 The New England Patriots’ newest wide receiver, Brandon Lloyd, has ranked in the top five in targets over the course of the last two seasons under offensive coordinator Josh McDaniels. Josh McDaniels is largely responsible for presenting Lloyd with an opportunity to revive his career after a relatively quiet first seven years in the league.

Josh McDaniels has now returned to New England for a second stint as OC, and the relationship between McDaniels and Brandon Lloyd has come full circle.

The former Denver Broncos head coach actually directed Brandon Lloyd’s pro day at Illinois prior to the 2003 NFL draft. At the time, he was defensive coaching assistant for the New England Patriots. McDaniels came back to New England raving about the ability of the Illinois wide receiver, yet Lloyd receiving a chance to work with his future career savior wasn’t quite in the cards as the Patriots decided against drafting him prior to his fourth round selection by the 49ers.

McDaniels followed Lloyd closely throughout his career and when the opportunity came to finally acquire Lloyd, as Broncos HC in 2009, Josh McDaniels was now finally in a position to do so.

Lloyd played sparingly behind a loaded wide receiver corps during his first season under McDaniels. After appearing in only two games during the 2009 season and after Denver trading Brandon Marshall to the Miami Dolphins in April of 2010, Josh McDaniels was ready to put the big play potential he had witnessed first hand at the Illinois pro day to the test. Seven years later.

Brandon Lloyd did not disappoint. Capable of stretching the field, readily gaining separation and adjusting to the ball while in the air, Brandon Lloyd surprised everyone but himself and HC Josh McDaniels. Bursting onto the NFL season for a statistical finality of 1448 yards receiving while leading the league with an 18.8 yard per catch average among WRs on more than 60 receptions.

When on the field for the play, in two seasons under Josh McDaniels, Tom Brady’s newest toy has maintained at least an 18% direct involvement in McDaniels offense and being directly immersed in the offense last season 21% of the time while in St. Louis. This role of obvious impact has also yielded 1.6 TD’s per game for the nine year veteran under Josh McDaniels’ tutelage. (An involvement in which the outcome of the play is dictated by Lloyd’s performance on or with the ball.)

Brandon Lloyd is currently the 27th wide receiver taken off of draft boards with an ADP of 62nd in twelve team leagues. While Brandon Lloyd may have hum drum stats from time to time this upcoming season, following Josh McDaniels to New England to team up with last season’s 2nd rated passing offense and 1362 offensive snaps, the positive yield for Lloyd should be tremendous and present great value for a fantasy owner come draft day.