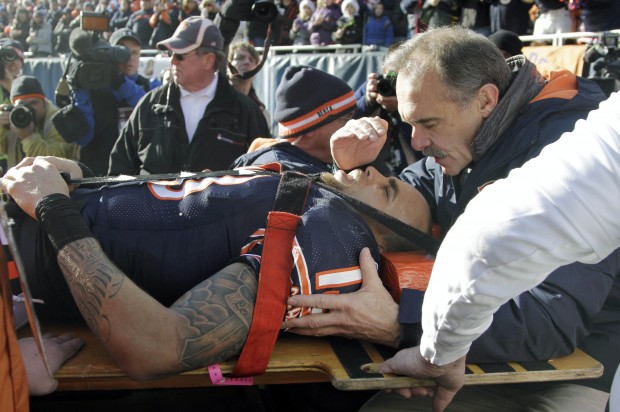 Here at Rosterwatch, we often talk about a player’s future contributions—what value he will bring to the game in time. It’s always discouraging when we need to bring up the rare player that, for reasons beyond his control, has to hang up his cleats sooner than anyone might have imagined.

This is one such occasion.

Wide receiver Johnny Knox, formerly of the Chicago Bears, announced on February 13th that his football career is effectively over. This move follows an almost paralyzing spinal cord injury, and (frustrating road to recovery) following injury in a game versus Seattle in 2011.

Knox sustained a thoracic-lumbar junction fracture-dislocation with neurological implications in the injury, which occurred when he tried to recover his own fumble and collided with then-Seahawks defensive end Anthony Hargrove. Surgery to repair an unstable vertebra immediately followed the incident, and sensation remained in all of his limbs, but the instability of his spine and subsequent nerve damage put Knox on injured reserve and has ultimately made the return to football an impossible option.

Knox was a guy I personally loved to root for for. A smallish, speedy player from Texas, Knox worked his way up from Tyler Junior College—where he led all junior college receivers his sophomore year with 884 yds and 12 TDs—to Abilene Christian University, where in 2007, he racked up the 4th-most single-season receiving yards in school history after entering as a backup.

Knox soon brought his talent to the NFL where in his second year, 2010, he came into his own and put up 960 yds and 5 TDs, leading the Bears in receiving. His 19.6 yards per catch average the following year was second highest in the league before he went down.

Knox’s career was promising to say the least, so it’s tough to see him have to shut things down so soon into it. He was my kind of fantasy player, a no-name upstart who could hurt unsuspecting foes with one big play. I imagine the combination of Knox and Brandon Marshall could have opened up the Chicago passing game considerably this past season. Who knows, maybe Lovie Smith still has a job if Knox had been part of the equation. We don’t know, and I’m not sure what the future holds for him, but the love of an adoring wife and two children coupled with a strong faith, leave me optimistic for Knox’s outcome in life after football. What I do know is that the NFL has one fewer player worth rooting for in its fold.