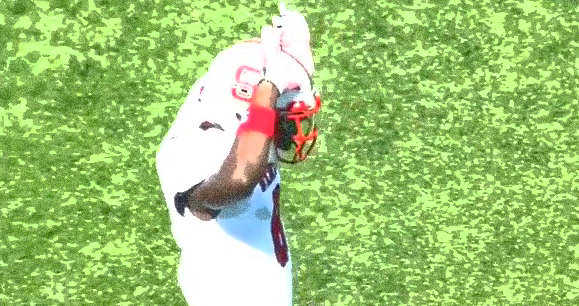 There’s been a Lee Evans shaped hole in the Bills’ passing game for the past couple of years.

Sure, Stevie Johnson is nothing less than stellar. He constitutes most of the passing game in Buffalo, and fantasy owners appreciate him for it, but I literally mean a Lee Evans shaped hole. I mean a smallish and quick receiver who can make big plays down field in Chan Gailey’s Pistol Spread offense. That’s why I’m excited about third round draft pick T.J. Graham. Graham dropped jaws with a 4.39 forty at the combine and even faster 4.35 at his pro day. Even T.O. would be impressed.

At 5’11”, 180 lbs, Graham has a physique seems better suited for a slot receiver, but the Bills are convinced he can play outside (probably due to that aforementioned speed.) Currently, he’s engaged in a position battle with Donald Jones who in his second year, and is in the lead most likely due to his knowledge of the playbook, but Graham isn’t far behind.

Graham’s reps with the first team seem to increase with every passing day, as do the number of difficult catches he pulls in. Unlikely to make an impact very early in the season, you shouldn’t worry too much about rostering Graham right away. But if you’re anything like the Trashman, you love to have this guy on your radar. Be prepared to pull the trigger sooner than later on T.J Graham.