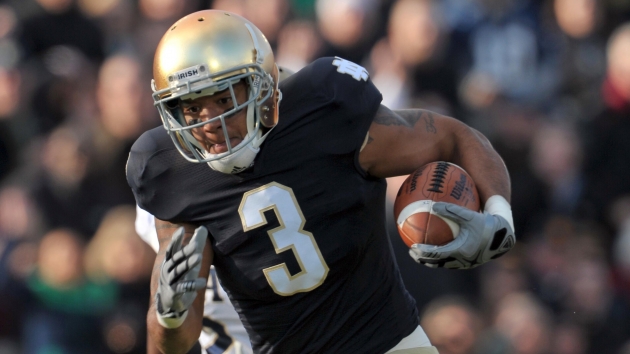 During college, Michael Floyd was cited with a DUI after two previous offenses for under age consumption of alcohol. I can’t imagine how hard it must have been to throw a beer party at Notre Dame, but apparently they tried.

All this stuff gets brought to the public eye anyway. So, when you hear about Michael Floyd’s “character issues”, remember where he went to school. Notre Dame. The institution’s traditional conservatism bled into the media’s portrayal of his trangressions as well as his punishment. You don’t hear a thing about Justin Blackmon’s DUI because the culture is different.

Floyd had to sleep in the dorm with the freshmen when he was a senior in college. His coach went on record as saying this was his last chance. The Dean of students made statements, etc. He really was worried for a time.

“Sometimes when you get to the league, you get this feeling like you got there…you had finally made it. It isn’t necessarily a good thing” said an NFL source with knowledge of the situation. “With (Floyd), he’s been humbled by this experience and learned he needs to work to earn it. I think he’ll be a player. Its his hands, he can obviously catch, but he has the strongest hands. He plays angry like he’s mad at you. He reminds me of Sterling Sharpe, same angry, aggressive player, same hands- strong hands, he’s gonna be good.”

He didn’t even mention yards-after-catch, his most beastly Brandon Marshall-like skill I see developing. I have loved Michael Floyd’s game tapes, and seeing him live, in person, at the combine was mere affirmation.

That’s why he’s the #1 WR on my board, I think he shows the most promise to project as a true #1 threat. I think Alshon Jeffery is the only other WR in this draft who has the ability to rival Floyd in this category.