Catching up with Alshon Jeffery’s Agent and Trainer 2 weeks prior to the NFL Combine.
Alex Dunlap, Rosterwatch.com 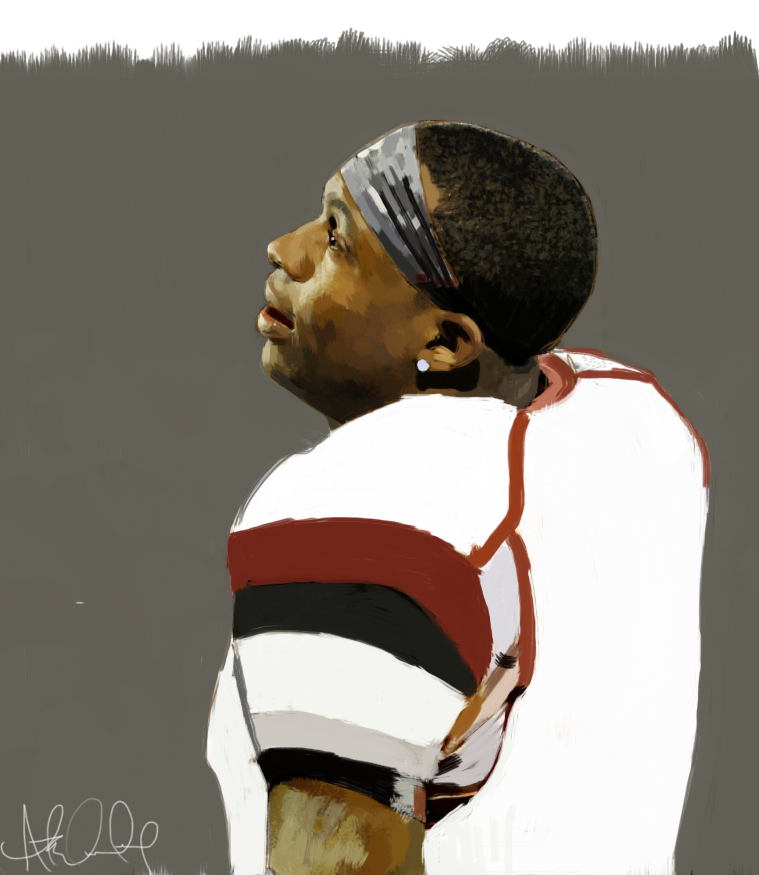 While draft pundits sit at their desks with coffee in their hands and soon-to-levied criticism in their fingertips, former University of South Carolina WR standout Alshon Jeffery is working his ass off. I had a chance today to speak in depth with key members of his representation team, as well as his world-renowned trainer to get a glimpse into how Jeffery is preparing for his future life in the NFL.

Jeffery was an unstoppable force as a sophomore at South Carolina, and came into his Junior season being heralded as one of the nation’s 3 top prospects at the WR position along with Oklahoma State’s Justin Blackmon and Oklahoma’s Ryan Broyles. Broyles has fallen out of this elite group due to ACL injury while Blackmon, by most every account, has earned his spot in the cat bird’s seat as the consensus #1 WR prospect of 2012.

Alshon Jeffery declared for the NFL draft after what most viewed as a disappointing junior campaign. Although he only scored one less touchdown in 2011, he finished his junior season with a little over half the yards (762) that he was able to accumulate his electric sophomore season (1517). In my opinion, this is an easily defended drop-off, and certainly not of the enigmatic Jeff Fuller-variety. Jeffery’s quarterback, Stephen Garcia was kicked off the team due to off-the-field issues while USC’s only other true standout force on offense was RB Marcus Lattimore who was lost for the season in October due to injury. In watching back the film, it is obvious that teams were basing their defensive game plan around neutralizing the Gamecocks’ only remaining weapon in Jeffery. He was fighting consistent press and multiple coverage looks for the entirety of his junior season with lackluster QB play and no real “click” to the offense. If you watch back, your eyeballs should tell you this. Your eyeballs should also tell you that this is the great Alfonzo Dennard that Jeffery makes look like a middle-schooler at the 1:00 mark:

That was a little over a month ago. So it’s not exactly ancient history. Dennard was playing him so hard and so physical in the Capital One Bowl that the two both ended up getting ejected for fighting by the 3rd quarter, but only after Jeffery had already racked up 148 yards and a TD (nearly 2) on 4 catches. Shortly after, this photo surfaced (taken prior to the 2011 Season): 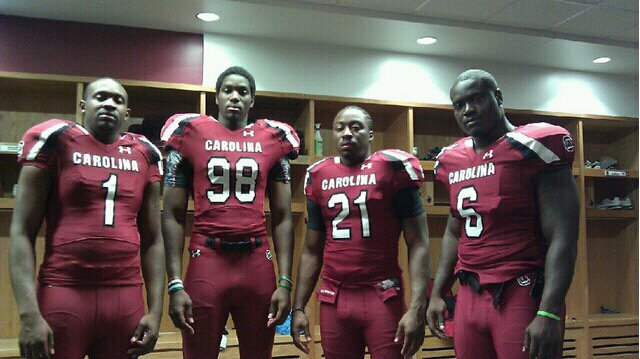 NFL Draft wizards everywhere who still wear a T-shirt in the swimming pool started talking about how he has trouble containing his weight. They questioned his motivation and began moving him down draft boards labeling him the next Dwayne Jarrett or Big Mike Williams. A big body with hands that cannot separate, cannot get into routes quick enough, and who will end up getting too fat.

His trainer sees things differently. Jeffery is now stationed at the Athlete’s Compound in Tampa where many of super-agent Eugene Parker’s clients go to prepare for NFL Draft season. His training is being overseen by their Director of Performance who has worked with athletes ranging from Ndamukong Suh to Derek Jeter who he personally trains in the MLB off season. Jeffrey is currently facing a regimen of 9-hour days that looks like this:

Jeffrey’s most often criticized attributes of his game are as follows:

“He has weight issues”

“He’s a diamond in the rough” Jeffery’s trainer said. “He’s taken to all of it so well. Our program is about learning how to be a pro, making that transition. Understanding the value of rest, regeneration and nutrition in the same way you value the actual ‘working out’. The first thing we looked at with Alshon was making sure we didn’t lose any bit of his muscle mass. Not that he was out of shape when he got here, but (with all these guys) our job is to make sure their bodies are in the best position to get the biggest return (on the various tests.) That means maximizing angle and force production as well as explosiveness while pounding fundamentals. (Alshon’s) got a bright future ahead of him. As far as his exact weight- ahh- it doesn’t even really matter. If there are issues about that, I will tell you- he is at his playing weight. He’s ready to show people that he will be really good in this league. I really mean that”

Jeffery has run the 40-yard dash in the mid 4.4’s and is projected to run between a 4.45 and a 4.65 at the NFL scouting combine. When I asked his trainer where he was in testing for the .40, he just told me that if you look at those numbers, he will be in perfect position and form to be on “the better side of that.”

“He doesn’t come off the line of scrimmage fast enough and makes sloppy cuts.”

“If I’m going to compare him to anyone, as far as that stuff- breaks, line explosion, change of direction- He’s got it. Guys like Michael Crabtree, Dez Bryant, James Hardy- obviously he’s a bigger guy but he’s fast and moves as well as any of those guys with that stuff.”

“He cannot separate from defenders downfield and he has shown a knack for running lazy routes.”

“What the average person doesn’t realize is the caliber of athlete (Alshon) is. If some people call it running lazy routes, it isn’t that. What is so special about Alshon is that he makes everything LOOK effortless at the college level. When we evaluate these guys, you have to take what you kow about them, what you know about body mechanics and decide for yourself: Is this guy not trying or is he so good that he makes it all look easy. Alshon is so good, so fluid and instinctual that sometimes it looks like he may not be trying. When you know the person, know the kid- you know that is not the case. He’s shined in everything we’ve thrown at him. Speed. Flexibility. Neuro. His body fat is where it needs to be and he has adapted to our lifestyle management program that he will be carrying with him, just like everyone else that makes this transition successfully. He’s smart and he gets it.”

Maybe Dre Kirkpatrick could join Alfonzo Dennard in telling all of us how lazy Alshon Jeffery is?