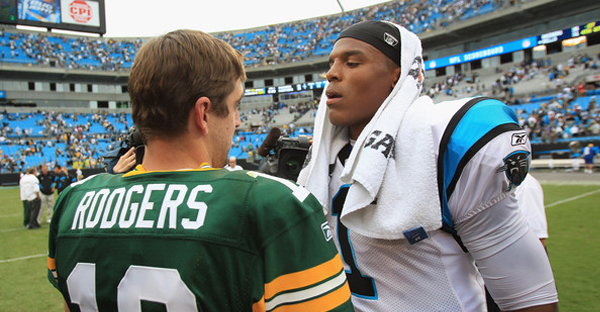 Editor’s Note: the rankings tab above is updated with daily rankings which may serve as a compliment to the following pre-NFL Draft commentary:

Folks it’s time to start studying up. You have to be ahead of  the curve  if you want to take down that coveted fantasy title. One of my strongest fantasy football convictions is owning a premium QB. Now that doesn’t always mean using a top pick, it means identifying the proper talent. The good news? This year’s fantasy draft is chalk full of QB talent and value. You will have your choice. My early 2012 fantasy QB rankings for you:

The Top Shelf. This group will win you many weeks single-handedly. Expect 30 point performances several times. Draft a QB from this group and guarantee yourself a spot in the playoffs. Doing so will require a 1st or 2nd round pick.

The Bridge. Upside of the top tier with a slightly lesser degree of certainty.

Draft Steals with Some Risk. These guys are great fantasy quarterbacks that have the potential to put up big numbers. Some inconsistency and injury risk. 3rd rounders.

I Hope I Already Have My QB but I Can Make This Work. All of these guys have a history of fantasy productivity. Some question marks and inconsistency. I like having my QB before it comes to this. Rounds 3-5.

The Final Frontier. If push comes to shove. This group is my safety net. They can still get you to the playoffs. Do not let it go any further. Draft these guys in rounds 5-8.

Ben Roethlisberger – My personal favorite of this group. Inconsistent but nice upside.
Matt Ryan – Still needs to take that next step. Year two of Roddy and Julio.
Jay Cutler – Gunslinger. Inconsistent. Brandon Marshall certainly helps.
Andy Dalton – Not relying on him but he is better than the guys in the next group. Has weapons.

This is Amateur and You Won’t be Making the Playoffs. Seriously? You did zero planning for this draft but you might be lucky because these guys are serviceable. PLAYOFFS!?!?!? If the rest of your team is amazing but I doubt that.

Matt Cassel – Some nice weapons.
Carson Palmer – Showed some prolific flashes last year. Expect a lot of inconsistency.
Ryan Fitzpatrick – He can be pretty good sometimes. I still don’t trust it.
Josh Freeman – A good floor with little upside is the reputation. Consistently a 13 point guy. Can VJax change that?
Hasselbeck / Locker – Don’t know which one. Either is serviceable.

God No, Tell Me it Didn’t Come to This.  You auto-drafted these guys right? It’s going to be a boring season.

Joe Flacco – Maddening to own.
Alex Smith – Consistent with little upside. Got some nice new receivers.
Kevin Kolb – Larry Fitzgerald and that is all. Pee Pee arm.
Sam Bradford – Can he resurrect his rookie potential? Needs weapons.
Mark Sanchez – Whimpy. Has the occasional nice game.

Hang it Up Now. Why did I sign up for this league?

Christian Ponder – No Thank You.
Matt Flynn – Seattle?
Colt McCoy – A decent bye week play.
Matt Moore – Dracula was pretty good last year. I don’t know though.
Tim Tebow – Ha. I actually think he still has some upside.
Gabbert/Henne – You can’t be serious? Who do they throw to?

Rookie Superstars. Keep a close eye on these guys.

Robert Griffin – Could be useful right away.
Andrew Luck – Dynasty or keeper pick.