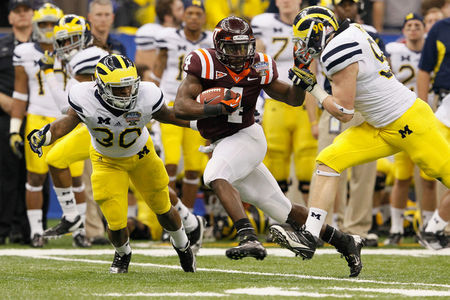 David Wilson is very dangerous on tape. An exciting player to watch, he is explosive and good at navigating traffic. He’s shown the ability to carry the load as a runner and provide some value as a pass catcher. He runs with power through the middle of the field but also looks sideline for the long run. Wilson showed big play ability by creating several plays over 50 yards during his college career. It’s no wonder he is leaving school early after a monster junior year. The stats back him up: 290 carries, 1709 yards, 5.9 yards/carry, 9 TDs.

The former Hokie will likely be drafted in the 2nd round with expectations to contribute immediately. He could be a fringe 1st round pick but he will fall no further than the 3rd round. Considered by many to be the second best running back prospect in this draft behind Trent Richardson. His experience as a kick returner may provide teams with some extra value.

I expect David Wilson to be a viable fantasy option at some point during the season. As a rookie I do foresee some inconsistency. There will be stinkers but there will be a couple of big games too.