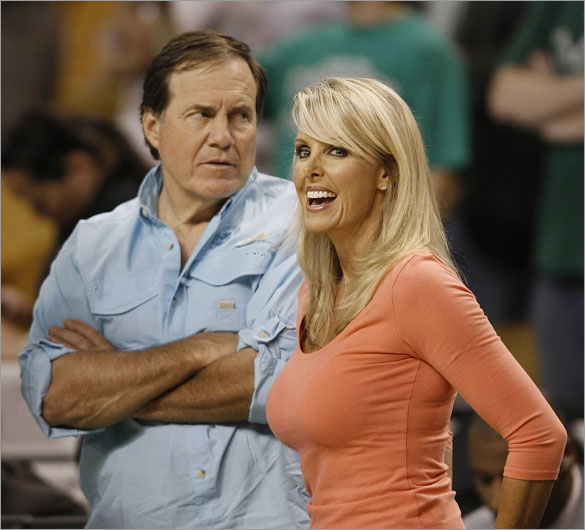 Thanks to the greatness of Orangebloods.com , a poster put up this picture earlier.
Let me first say Congratulations Mr. Belichick for your achievements both on and off the field.

Ah, Super Bowl Media Week. A lot of digging around for a lot of worthless crap that won’t mean jack the very second the ball is kicked off Sunday. Gotta love it.

But in my worthless digging I started seeing quotes from Belichick’s “Long Time Girlfriend Linda Holliday”, and had been consistently wondering what the issue was with that. Turns out Belichick was divorced in 2006, and was seen first with Holliday at an NCAA basketball game in 2007. She was at the time going through the process of her third divorce with a 53-year old Arkansas Business Man.

So, as was the case with Belichick’s earlier courtship process and eventual marriage to New York Giants receptionist Sharon Shenocca, the relationship began prior to or during his eventual “partner’s” divorce process.

Holliday was reportedly 43 at the time the couple was first sighted together, so that would make her approximately 47. She has kept in good shape, I would say.

Belichick is 59 and players have commented recently that he has seemed more relaxed, and most notably Wes Welker’s statements about Belichick having a “Lady in his Life”.

They still remain unmarried. Maybe they just both realize they aren’t too good at the whole marriage deal.