July 8th may fall squarely in the middle of a month of NFL doldrums that can give even the most casual NFL fan symptoms of severe football withdrawal, but the day does mark an important occurrence in NFL history. Today is the Pittsburgh Steelers’ birthday.

The Steelers were founded on July 8th, 1933 by current owner Dan Rooney’s grandfather Art Rooney. Art Rooney took an interesting path to becoming an NFL owner. The oldest of nine children in an Irish-Catholic Pittsburgh family, Rooney was a terrific athlete. Although he played virtually every sport, he may have been most gifted as a boxer. 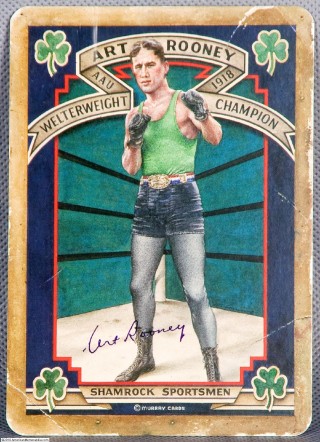 Rooney turned down a shot to make the U.S. Olympic team for the 1920 Summer Games. Many speculate this was because he did not want his eligibility as an “amateur” questioned, having participated in semi-pro baseball since age 15. He did however, box and defeat the gold medal winner of what would have been his weight class in those Olympics. Not once, but twice. Once just before the Olympic trials began, and once immediately after Sammy Mosberg earned the gold medal.

Rooney turned down a football scholarship offered by Knute Rockne to play football at Notre Dame, and instead attended Indiana State Normal School. He also spent time studying at Geogetown University as well as Duquesne University, although he never earned a college degree.

Rooney started the Steelers by paying the city of Pittsburgh a $2500 franchise fee (which would be about $38,000 today) on this day 79 years ago. They were then the Pittsburgh Pirates. It was a common exercise for fledgling pro football clubs in sports cities to name their mascots after those of the more-established professional baseball teams.

The Steelers are the 6th or 7th oldest NFL club at age 79, depending on whether you are asking an Eagles fan or a Steelers fan. The oldest NFL team is actually the Arizona Cardinals, founded in 1898 as the Morgan Athletic Club. The five other teams who have been around longer than the Steelers are the Bears, the Packers (who are the NFL’s oldest team that has kept the same mascot/location), The Giants, The Lions and the Redskins.