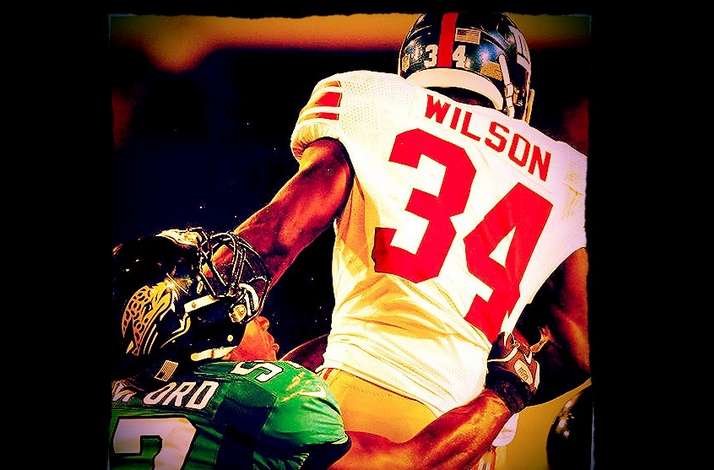 Having no bias toward, or against, David Wilson, apparently I erred in last week’s Best Case/Worst Case Column. The same column from which Lamar Miller’s best case scenario seems to be coming true.

Things have gotten much worse for David Wilson (and his fantasy owners) in a hurry. Worse than I ever could have calculated, even just three short days ago. It’s the Worst Worst-Case Scenario, and David Wilson owners are staring it straight in the eyes.

The amount of confidence Tom Coughlin showed in Brandon Jacobs is unfathomable. By now, we should all know that the TipToe Burglar is only good for one thing- robbing your fantasy teams of value- one way or another.

As for Da’Rel Scott, all of a sudden he looks like the new Joique Bell. He played almost 50% of snaps in Week 2, while David Wilson barely squeaked out a 30% snap-count. If Scott turns out to be anything like Bell- he is going to keep playing.

None of this is good—at all—for David Wilson. It’s the worst Worst-Case Scenario. Potentially leaving Wilson owners with a low-end RB3 or possibly even worse—an RB4/matchup-based flex-play. All very tough outcomes to stomach for the hundreds of thousands of players who recently selected David Wilson in the early rounds of fantasy Drafts.

I will leave Wilson owners with some hope. Remember, this is the worst case scenario. As we’ve seen, things can change in a heartbeat. Wilson’s stock could head North just as quickly as it headed South.

But, for now, the basement-level scenario appears to be the status quo for David Wilson- albeit possibly only in the short-term. We still think he can rebound to capture legitimate RB2 status by season’s end.

In the meantime, owners will have to consider benching Wilson in favor of hotter prospects- at least against the tough matchups until we see more from the sophomore.