Trades to Fish Around for This Week
Byron Lambert, Rosterwatch.com 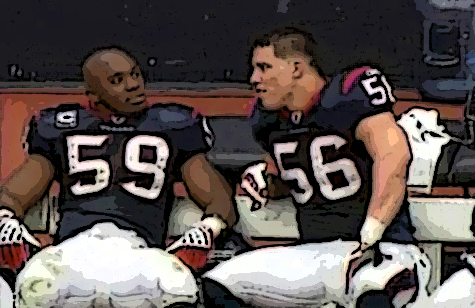 That’s what we have this week. A lot of byes. A lot of strange Week 6 fantasy performances. And the market dries up just like that.

Fear not my prized thrift shoppers. For those of you looking for roster value or itching for action, I’ve still cooked up a few swindles you just might try and pull off on The Week 7 Trade Exchange.

A theme this week is the bye-week roster nightmare. With so many player-values in trade purgatory, you should look for owners in your league with bye week problems. These are rosters than can still be squeezed for value. Many times these owners are looking to plug a few roster holes and sometimes you can get a discount on a good player facing a bye. While they aren’t going to get fleeced to save one week, this is a great opportunity to try and trade those owners a few solid players for a premium player in return. Consolidate your equity.

If I had the roster depth to permit, I would definitely attempt to sell Dez Bryant high to a Julio Jones owner that is facing an Atlanta bye.

I would ship Darren McFadden to a LeSean McCoy owner in a heartbeat during this Week 7 Philadelphia bye. It’s perfect. The Eagles are in flux, McCoy has been good but not great, and his owners might be antsy during the bye week. McFadden is what he is. I love Shady’s upside much more. This is an opportune time to move Mcfadden after Week 6 fantasy production that looks good on paper. Don’t forget, your sales pitch should include the fact that Oakland’s bye is already out of the way. Ryan Mathews may also be a “buy low” here as he heads in to a bye after a disappointing season so far.

Double Dwayne Bowe? Maybe not if Brady Quinn keeps throwing to him. 6 points. 2 points. Bye week. There could be something there. Bowe is a high upside #2 fantasy receiver. During his bye, I would trade a good #3 WR for him. Somebody in the Kenny Britt-Antonio Brown-maybe even Brandon Lloyd and Steve Johnson range. If it were a running back that the Bowe owner needed, I would part ways with someone in the Doug Martin-Chris Johnson range.

Guys that might actually play this week who could be good buy-low options:

Hakeem Nicks owners may not be inclined to budge after waiting so long for his return. He would be a good score though. Injury concerns, three goose eggs in a row, and a four pointer in his Week 6 return. His value certainly isn’t high. A minor discount is worth a look. Again, I’m thinking Steve Johnson or Brandon Lloyd and maybe a low-end RB3 here. James Jones would also be an ideal “sell high” for Nicks.

Benjarvus Green-Ellis is sorely under-performing. It’s hard to say anything good about him, but after the Bernard Scott injury he is literally the only option the Bengals have. He is going to get the lion’s share of opportunities on a good offense. I can’t help but like that. If I could trade McFadden for Green Ellis plus another good player, I would do it.

This one could be a stretch, but let’s say you are one of those teams that ended up with a couple of good tight ends. I might try to package one of them for Jimmy Graham, he has underperformed and his owners could be nervous about missed games and or long-term injury.

Cheers and happy trading! Hit us up with your trade questions, we answer ‘em on Twitter @Rosterwatch