Who You Should Pick Up This Week
Byron Lambert, Rosterwatch.com 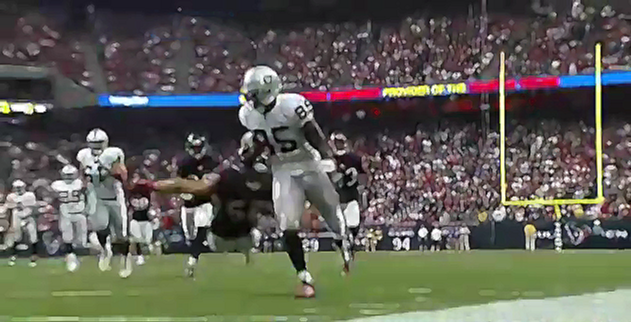 Carson Palmer, QB OAK
He’s scored over 15 points in 5 out of 6 games. Palmer has been a yardage monster. Through six games he is on pace to throw for over 4,600 yards.

Matt Hasselbeck, QB TEN
11.5 ppg over the last four games. Basically three eleven pointers and one thirteen pointer. Jake Locker is still hurt and Hasselbeck is expected to start in Week 8 when the Titans have a delicious Colts matchup coming to town.

LaRod Stephens Howlings, RB ARI
His name is funny but his game is no joke. Occasionally. The Cardinals backfield is in dire straits right now and the arrow is pointing in Howling’s direction. Don’t get wildly excited, but he did have an impressive 149 yards and a touchdown on a hefty 24 touches against a tough Vikings defense. More importantly, he played for 76% of the offensive snaps to Williams Powell’s 11% . He outpaced Powell in Week 6 snaps as well.

Phillip Tanner, RB DAL
38 yards on 14 touches wasn’t impressive against the Panthers. He played more snaps than Felix Jones who now has a banged up knee. DeMarco Murray still looks to be out. Tanner could be in for a big workload. It’s questionable whether his production will match.

Jonathan Dwyer, RB PIT
It seems like every time he plays, he looks good. Dwyer chalked up 122 yards on 17 carries on Sunday Night. Mendenhall and Redman could both miss more time.

Nate Washington, WR TEN
Old reliable. He led the team in offensive snaps and targets as well as posting a touchdown in Week 7. It looks like the Titans are sticking with Hasselbeck for at least one more week, which is great news for Nate Dogg (RIP). One of the safest bye-week plays you can make. The Colts come to town in Week 8 for a great matchup.

Andre Roberts, WR ARI
He’s been pretty solid all year. Roberts had 16 points on 9 targets against Minnesota in Week 7, playing on 75% of the Cardinals offensive snaps. He might have been dropped after delivering stinkers in Weeks 5 and 6.

Stephen Hill, WR NYJ
I’ve been harping on this one for a while. Hill is the best Jets receiver and biggest playmaker. When he’s been healthy Sanchez has been looking for him steadily. He led all Jets receivers in Week 7 snaps. Hill is a great play this week at home against Miami and is owned in less than 25% of leagues.

Chris Givens, WR STL
Another really good rookie. Givens is only owned in 9% of leagues. He led the Rams with 87 total yards in Week 7, and racked up only one less target than the more-coveted Brandon Gibson. Givens is the bigger playmaker while he has also shown a nice floor in the post-Amendola era. If Givens is unavailable it is worth checking Gibson’s status, as he is still a viable option.

Darrius Heyward-Bey, WR OAK
Available in half of leagues, Heyward-Bey is back to full health. DHB registered almost as many snaps as Denarius Moore on Sunday and is a clear cut starter. Carson Palmer is slinging it around like Dan Marino and Heyward-Bey is flashing his big play potential.

Santana Moss, WR WAS
Moss has been the great reciever play in Washington lately, averaging 12 ppg over the last three contests. The scary part is that he only played 24% of the Week 7 offensive snaps.

Cecil Shorts, WR JAC
He has three 12 point games this season. Shorts played 97% of the offensive snaps in Week 7 and registered 79 yards and 1 touchdown.

Titus Young Sr., WR DET
A disappointment so far this year after flashing ability as a rookie. For a while I thought it was the “Sr.” that he added to the back of his jersey that was slowing him down. Turns out if might have been the crafty Nate Burleson doing the slowing. Once Burleson broke his leg Young stepped up with 81 yards on 8 targets. He has big play potential and is the #2 receiver in Detroit for the foreseeable future.

Ryan Broyles, WR DET
A really talented rookie coming off of college knee surgery. At some point Broyles is going to be a very valuable asset to the Lions. It could be a bit early but he did have 51 yards and a touchdown on Monday night. A desperation play in deep leagues that actually has some chance to pay off.

Brandon LaFell, WR CAR
He’s been hard to recommend this year but is back on the radar. LaFell had 11.3 fantasy points against the Cowboys on Sunday. He played 95% of the offensive snaps while ringing up 53 yards and a touchdown. His stock fluctuates with Newton’s.

Dwayne Allen, TE IND
The Colts play the Titans in Week 8. Tennessee has been one of the best tight end matchups all year. Allen is starting to look like Luck’s guy. He played 79% of the offensive snaps to only 49% for Coby Fleener.

Brandon Myers, TE OAK
We love him at Rosterwatch. The model of consistency and a great bye-week play. He had an off week in Week 7 and still had 4 points, while playing on 100% of the offensive snaps and getting a whopping 10 targets.

Dallas Clark, TE TB
Really? 6 targets for 51 yards and a touchdown. Thanks to an improved passing game, coach Greg Schiano says defenses are now rolling coverage to Vincent Jackson and Mike Williams leaving the middle of the field open. In theory that sounds good for Clark. He is still second fiddle to Luke Stocker in snaps, 55% vs 62%.