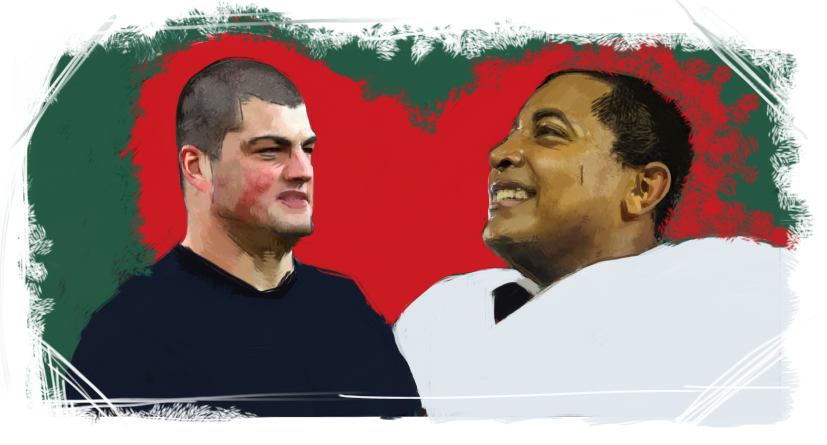 Let me first say that I am no fan of Stanford OT Jonathan Martin as a left tackle in the NFL. I think his center of gravity in pass protection is far too high and I hate his general positioning against the rush. I think he is a good run blocker. Here is the problem: We are talking about Stanford here. These kids are smart. These offensive linemen should understand the rationale and physics of the line of scrimmage. It makes Jonathan Martin’s habit of getting on his heels and opening his right shoulder up to slanting DEs constantly in the passing game very puzzling. I would rather have Stay Puft Marshallow Mike Adams having my QB’s blind side in passing downs, and that is saying something. With all this said, I think he could be an excellent, high upside (and most importantly) immediately serviceable option at RT, making him very draftable in the late first round.

Guard David DeCastro, on the other hand, is lightning in a bottle. I say that because when I watch his film- I think “Pop!” when the ball is snapped. I see explosion and power. He keeps a low, powerful base, has a relentless motor and can scrape to the second level with precision and speed. I think he is unbelievable. Historically, it is rare for an interior offensive lineman to go in the Top 10 or 15 picks of the NFL Draft. When you couple DeCastro’s elite ability with the current need among more than half the teams in the NFL for solidification along the inside of their offensive lines, David DeCastro will not slide past pick 14 to the Dallas Cowboys.

It is a much more rare occasion for two offensive line players from the same school to go in the first round of the NFL Draft. Of the six times this event has occurred in NFL draft history, both prospects have had good to great careers twice. Twice, one prospect has had a truly elite career while the other was a relative bust. And twice, both prospects have been busts. The only time a Guard/Tackle grouping who lined up on opposite sides of the line of scrimmage was drafted (DeCastro lines up on the right while Martin lines up on the left) was 1996. That produced one multiple pro bowler and one bust:

2001 – Steve Hutchison (LG), Jeff Backus (LT) Michigan
Hutchinson is a seven-time pro bowler.
Backus has had a long, serviceable career as the anchor of a constantly struggling offensive line in Detroit.
Both lined up on the same side of the line of scrimmage in college.

1996- Jeff Hartings (RG), Andre Johnson (LT) Penn State
Hartings was a two-time pro bowler after being acquired by the Steelers and moving to center.
Johnson played three games as a pro and is indisputably one of the biggest busts in draft history.
They lined up on different sides of the line of scrimmage in college.

1991- Charles McRae (LT), Antone Davis (RT) Tennessee
Davis was terrible. He played five years as one of the most penalized tackles in Eagles history.
McRae was another bust, playing only 38 career games.
They lined up on different sides of the line of scrimmage in college.

1982- Mike Munchak (LG), Sean Farrell (RG) Penn State
Munchak was a nine-time pro bowler and is currently head coach of the Tennessee Titans.
Farrell was drafted accidentally by the Bucs and spent his career as a journeyman, back-up-caliber player.

1980- Anthony Munoz (LT) Brad Budde (C) USC
Budde played for 6 inconsistent seasons as a guard and was considered one of the Chiefs’ biggest draft busts of the 1980s.
Munoz was one of the best tackles in NFL history and a Hall of Famer.