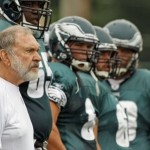 Photo Credit
Offensive Line Coach- Howard Mudd, Eagles
Howard Mudd is the man who sparked my idea to make a position coach “Dream Team”, so we’ll start with him. The 70-year-old Mudd is widely thought to be the best offensive line coach in the history of the league. During his 12 year tenure with the Colts (his sixth NFL stop as an NFL OL coach) they allowed the fewest sacks of any team in the league. Peyton Manning credits a large amount of his success to the protection he received from over-achieving, smart, and relatively less physically gifted linemen such as Jeff Saturday. After retiring on the heels of the Colts’ 2009 Super Bowl victory, he was coaxed back into the action by Andy Reid and the Eagles in 2011. As usual, he made an immediate impact. The Eagles allowed 17 fewer sacks in 2011 than in 2010, and paved the way for RB LeSean McCoy to lead the league in touchdowns. Pro Football Focus, upon examination of every NFL lineman on every play of the 2011 season, rated the Eagles as the league’s second best unit. Prior to his arrival, the unit graded out in the bottom half of all NFL teams in 2010. 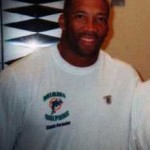 Photo Credit
Tight Ends Coach- Bernie Parmalee, Chiefs
Had Brian Ferentz not left the New England Patriots as TE coach following the 2011 season, the young puppet master behind the Gronkowski / Hernandez explosion would most certainly be part of my position coach dream team. But, Ferentz accepted a position coaching for his father at Iowa as offensive line coach. I always admired Bernie Parmalee’s understanding of the game, and his complete play as a versatile running back within the Dolphins’ precision scheme led by Dan Marino. Parmalee was one of the members of Todd Haley’s staff that was retained by new Chiefs head coach Romeo Crennel as they continue morphing into what is seeming to resemble “Patriots West” under GM Scott Pioli. Parmalee now enters his third season as Chiefs tight ends coach, and has already been credited with the development of the leading rookie TE in Chiefs history for receiving yards in Tony Moeaki. Prior to joining the Chiefs, Parmalee spent only two years as tight ends coach at Notre Dame, but has been given credit for shaping three of the best tight ends in the school’s long and legendary history: John Carlson, Anthony Fasano and Kyle Rudolph. 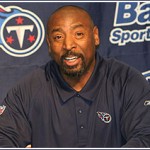 Photo Credit
Running Backs Coach- Earnest Byner, Bucs
Earnest Byner may be the only position coach in history to be fired not once, but twice immediately following a season in which his position grouping led the NFL in one of its most prominent statistics. In 2009, he coached Chris Johnson to the NFL rushing title as Titans RB coach, and was subsequently fired by then-HC Jeff Fisher. That season, Johnson broke Marshall Faulk’s all-time yards from scrimmage record with 2,509 yards. In 2011, as RBs coach of the Jacksonville Jaguars, he again coached the league’s leading rusher in Maurice Jones-Drew. A complete coaching staff overhaul in Jacksonville with the arrival of new HC Mike Mularkey once again left Byner jobless after basically being the best coach for his position in the NFL. When former Rutgers HC Greg Schiano arrived in Tampa Bay, he was quick to acquire the services of Byner, who will be tasked with the responsibility of drawing whatever potential is there out of LeGarrette Blount and developing dynamic rookie Doug Martin who the Bucs traded up into the first round to acquire. Doug Martin reminds many analysts of another RB that Schiano used to coach at Rutgers: Ray Rice. 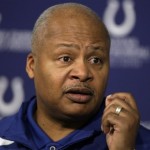 Photo Credit
Quarterbacks Coach- Jim Caldwell, Ravens
Jim Caldwell is one of the NFL’s true “good guys” and a Tony Dungy disciple. While it is hard to insinuate that he is entirely responsible for the Colts’ prolific QB play for the better part of a decade, it certainly bears mentioning that he was installing game plans with Peyton Manning for seven years as his QB coach. Upon being named Colts head coach following Dungy’s retirement, he became the fifth rookie HC to take his team to a Super Bowl. The Ravens and the Colts ended up making a bit of a coaching swap in the 2011-2012 offseason when Chuck Pagano, an exciting defensive coordinator who was very aggressive, (almost to the point that some analysts would call reckless at times) was named head coach of the Colts in their post-Peyton Manning-era house cleaning which left Caldwell jobless. It was not long before Caldwell received a call from Ravens head coach John Harbaugh. Harbaugh basically “created” the position for Caldwell by relieving offensive coordinator Cam Cameron of his duties as QBs coach, an ancillary role he held in 2011 in addition to being OC. It seems the Ravens are ready for QB Joe Flacco to take the next step, and they brought in the man who may just give him the best shot. 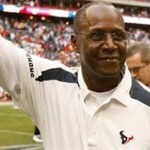 Photo Credit
Wide Receivers Coach- Larry Kirksey, Texans
While it is obvious that Andre Johnson is what the Texans’ website describes as “Kirksey’s star pupil”, he certainly isn’t his only one ever. He has overseen the development of two NFL WRs with over 1000 career receptions in Jerry Rice and Terrell Owens. Kirksey is also credited with the grooming of the best Jacksonville Jaguar ever in Jimmy Smith. Jerry Rice is the best player to ever put on a football helmet, and although he is currently down and out, Terrell Owens is certainly a future Hall of Famer. Kirksey managed to steer Houston’s 2011 receiving game to middle-of-the-road status league-wide in a season in which Johnson was constantly injured using absolute scrubs. TEs Owen Daniels and Joel Dreesen provided sporadic help to an air attack wielded by second and third-string QBs, but most certainly had what would be considered a “down year” out of the position.