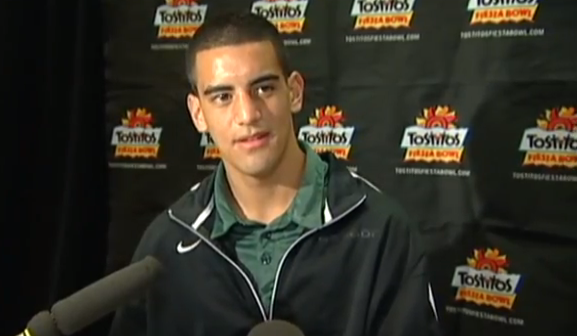 At this stage in his career, Mariota thrives off of his athletic ability, especially being in Oregon’s high tempo offense that often leaves teams gasping for air and scrambling to get ready for the next snap. If he needs to leave the pocket, which he does often, his acceleration and speed allow him to blaze past slower or unaware defenders. Other than (maybe) Devin Gardner, Johnny Manziel, or Braxton Miller, Mariota is the best running quarterback in the nation. At 6’4”, he may need to add a bit of weight to his frame. As of now, he’s a bit frail and may take a beating at the next level.

Due to his natural arm talent, the zip Mariota creates on his passes is efficient and allows him to be able to squeeze in balls where other quarterbacks may not be able to. Regardless of how fast a quarterback can sling it, the trait becomes useless if he can not place the ball where it needs to be. Mariota will occasionally miss—quite terribly, at that—and it has cost his team an easy first down more than once. It appears to be a footwork issue more than anything. Especially when in the shotgun, Mariota will stand completely still in the pocket and try to throw without stepping into it or, at times, without rotating his hips. When Mariota fails to perform these essential mechanics, he often misses his intended target, usually by overthrowing them. Oregon WR Colt Lyerla has been overthrown a countless amount of times by Mariota because Mariota failed to step into his throw and follow through with his delivery. Considering he isn’t using proper mechanics, Mariota’s natural placement and touch is often disappointing, but has a few shining moments (to Lyerla vs Arizona for touchdown, to Thomas vs USC for touchdown).

Speed kills in Eugene and their quarterback is very much a part of this. While it can lead to jaw-dropping runs or a few uncanny escapes from a broken-down pocket, it appears Mariota has developed a run-first mentality. The young quarterback will bail a fairly clean and safe pocket after only scanning the field for a quick second or two. Some call this the “Blaine Gabbert Disease.”

While it is more of a curse because a quarterback should win games from the pocket, his mentality saves himself and his team at times. As soon as Mariota senses pressure, which he often does well, he will take off running through the largest and most accessible gap that he can find. This both saves him from taking brutal hits and he can pick up yards, or at the very least, lose fewer than he would have had he not moved. As a progression reader, Mariota is unproven. Former HC Chip Kelly’s system was designed around high-tempo, one read passes that get the ball out quickly and get it in the hands of speedy playmakers in open space. At times, Mariota’s inexperience became most evident—even under Kelly—as he forced passes he clearly shouldn’t have because that was how the play was designed and he refused to divert from it.

Draft grade (as of now):

While it would be ill-advised for him to declare after the 2013 season, Mariota may end up doing so. As a passer, Mariota is obviously raw, but his natural arm talent gives hope for potential. His athletic ability, more important for a quarterback in the NFL than ever, are likely too intriguing for him to slide very far down draft boards. His potential and athleticism may get him bumped up a bit more than he should be, but at this stage in his career, Mariota should not be drafted until the end of the third round, where an already successful team may be able to groom him for a few seasons and then let him eventually become the well-polished face of their franchise.