Round 2 Primer
Round 3 Primer

Leonard Fournette, RB JAX – It’s a landing spot that was somewhat expected for Fournette as the Jaguars seem to be in final-evaluation-mode regarding QB Blake Bortles’ future with the franchise. A weapon such as Fournette in the run game is the last surrounding piece necessary, given the team’s currently full arsenal of receivers.

Fournette becomes an automatic face-of-the-franchise-level player and a must-own in all fantasy formats. He’ll face initial competition for touches to start his 2017 rookie season from an injury-prone Chris Ivory as Ivory plays what will surely be the final year of his deal in Jacksonville. (Although it is technically a five-year deal through 2020, the team will not be paying Ivory the egregious $22.5M he’s owed from 2018-2020 when there is only $6M in TOTAL dead money associated over that three-season duration). The Jaguars still have T.J. Yeldon on a cheap rookie deal through the 2018 season, and moving forward, Yeldon should be viewed as nothing more than a low-upside complementary piece to Fournette. Yeldon will likely have to make his hay as a change-of-pace receiving option on passing downs. However, let’s not forget that Fournette’s skills as a receiver have been underrated and under-sold by virtually the entire fantasy industry. It’s no lock that we’re looking at a situation where Fournette is off the field outside of “and-manageable” situations as he becomes acclimated in the offense. 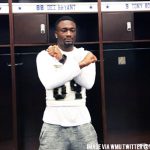 Corey Davis, WR TEN – The Titans shocked the draft community on Day 1 of the 2017 proceedings by selecting Corey Davis, the size/speed freak from Western Michigan. At least we think he’s a speed freak. The biggest knocks on Davis were that he played college football in the MAC and that he’s been too injured to do testing through draft season. The Titans won’t ever know how fast Corey Davis runs a 40-yard dash, but GM Jon Robinson surely has visions of yards-after-catch dancing through his head when picturing a Marcus Mariota to Corey Davis connection.

Davis, who profiles on film along the lines of Dez Bryant or Demaryius Thomas, steps into a role where he could possibly be peppered with targets right off the bat. This is a Titans receiving corps that boasts Rishard Matthews as its go-to and Tajae Sharpe as its second-best option. That is … anemic to say the least. Davis will not only bite into targets from the current receivers on board right off the bat, he stands to also siphon off action from the soon-to-be-33-year-old TE Delanie Walker as Walker enters what looks to essentially be his last year in Tennessee. Walker is due a $7M+ cap number for 2018 with only $833K dead money associated. Mariota-to-Davis looks to be the connection of the future in Nashville and Davis immediately becomes a must-own in all fantasy formats. 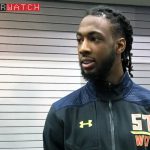 Mike Williams, WR LAC – If you thought Davis to Tennessee was surprising, this pick by Chargers GM Tom Telesco must have really blown the old hair back. Williams had a “secret workout” with the Bolts days before the draft which, miraculously, actually stayed a secret. Williams steps into a terrific situation on the surface with a veteran signal caller in Philip Rivers and an offense that had the 8th-most passing yards in the league last season, despite being without the services of its No.1 wideout in Keenan Allen. Looking deeper, though, there are causes for concern in fantasy. First off, Keenan Allen will be returning in 2017 healthy. Opposite Allen is Tyrell Williams who broke out in 2016 and possesses a long-speed element that brings something different to the table than any receiver on the roster.

Mike Williams, who has a lot of Michael Thomas to his game, is best known for his ability to win in contested situations and to beast in the red zone. While this sounds ideal in a Philip Rivers-led offense, we should remember a few things: 1) Rivers isn’t getting any younger; 2) Antonio Gates is still on the roster as Rivers’ long-time red-zone standby and 3) Hunter Henry did the unthinkable for a rookie TE in 2016 by scoring 8 TDs, showing his prowess in this same area. While it’s clear that the Chargers coveted Williams in a big way and have a plan for him in their offense, it’s going to be a muddled situation to start. This is one we’ll have to monitor through camp to see how the targets are likely to be distributed. Williams is a great player (our No.2 WR in the draft based on talent alone) but the landing spot for fantasy purposes is somewhat less-than-ideal.

Christian McCaffrey, RB CAR – Panthers GM Dave Gettleman is a straight shooter and he’d indicated through the process that McCaffrey could be in play at pick 8 for Carolina. As far as landing spots go, this one should be considered fantastic for prospective fantasy/dynasty owners of McCaffrey, or those that have held them on their developmental and CFB underclassmen taxi rosters. The Panthers had a clear need for both runners and wide receivers. Jonathan Stewart is on his last legs at the RB position and the team seems to have grown at least somewhat disenchanted with the big-bodied outside targets in Kelvin Benjamin and Devin Funchess.

Enter Christian McCaffrey who essentially plays both positions. He may not be a “three-down back” but he’s a three-down player who can take a handoff on one play, line up in the slot on the next, run a flat-route out of the backfield on the next. Don’t forget he’s also a dynamic weapon in the return game who is sure to add a TD or two in this realm for fantasy purposes. QB Cam Newton has always been inaccurate and an intermediate receiving target such as McCaffrey – who the team can line up in position to win matchups – is just what the doctor ordered to bring his pathetic career-low completion percentage from 2016 back up to snuff. 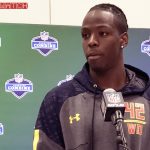 John Ross, WR CIN – A golden son of RosterWatch Nation, John Ross is our No.1 WR prospect in the draft based on the evaluation-portion alone. The fastest man in recent NFL combine history is a nuclear weapon. Ross is thought of by many as a diminutive speed-only WR but he weighs almost 200 pounds and carries more substance than could be reasonably expected. The situation in Cincy is one we should have higher on the radar for a player like Ross as it’s actually a terrific fit football-wise. Marvin Jones and Mohamed Sanu are both long gone and Brandon Lafell opposite AJ Green as the No.2 option for the Bengals was simply a situation that needed upgrading.

The first implication of the signing is that Brandon Lafell’s value takes a big hit (for people like the Trashman who still consider Lafell a legitimate fantasy option). This is not so much the case for second-year son of RosterWatch Nation Tyler Boyd as it merely moves him inside to the slot position exclusively where he’s more likely to flourish as the possession-threat he optimally is. If TE Tyler Eifert can actually manage to stay healthy (big if), A.J. Green and Ross should open things up nicely over the middle and into the intermediate areas of the field for Eifert and Boyd as the two burners will demand over-the-top help and bracketing from the safeties.

As for Ross himself, he’s an unbelievably sick playmaker who’ll make his presence (and his need for the team to get the football in his hands) known early and often opposite AJ Green. While Ross could be a little bit boom-or-bust to start the 2017 season, he’ll have some big games if he stays healthy, and will round into being a reliable option for week-in-week-out upside by Week 6 or so. The selection also could mean good things for QB Andy Dalton as the passing game appears to have become more efficient and certainly potent with what the addition of Ross allows it to do personnel and matchup-wise.