Zay Jones, WR BUF – A truly precious son of RosterWatch Nation and member of the 2017 6th-Annual RW All-Senior Bowl Roster, Zay Jones was actually the Trashman’s No.1-ranked wideout in the entire 2017 class. Overall, the consensus of RosterWatch staff had Jones pegged just below Corey Davis as WR4 for 2017 based on raw talent evaluation alone. Jones had an unbelievable/unstoppable week at the Senior Bowl against the best competition in college football and will be a model employee and teammate for the Bills organization.

He enters a situation in Buffalo where he’ll be reunited with his former WR coach from ECU, Phil McGeoghan, who joined new HC Sean McDermott’s Bills staff this offseason – and where his competition for snaps is nothing short of abysmal. Outside of Sammy Watkins (who has yet to stay healthy through an NFL season and who the Bills have thus far declined to pick up a fifth-year option on) the unit’s best options are Andre Holmes, Corey Brown, Jeremy Butler and Walt Powell. That is expansion-franchise-level garbage. In fact, it’s impossible to imagine how things ever got this bad.

Regardless, it’s clear that Jones steps into an immediate No.2 role. New Bills OC Rick Dennison runs a west coast offense with a levels-based passing game that should benefit a possession-receiver-plus like Jones opposite a home-run threat like Watkins. Jones’ situation in Buffalo appears to be a perfect illustration of “talent meeting opportunity” in fantasy football. 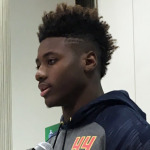 Curtis Samuel, WR CAR – Panthers GM Dave Gettleman once again pulled up his big boy pants and sent a big message to the current receivers on the Panthers roster by taking a second RB/WR hybrid in Curtis Samuel in Round 2 after selecting Christian McCaffrey in Round 1. Samuel is a speed demon that played most of his snaps as a running back at Ohio State after Ezekiel Elliott moved on to the NFL and was a dynamic weapon. Gettleman called Samuels’ top gear “oh-my-gosh speed” at his post-day-two press conference.

Samuel told reporters following his selection via conference call that the Panthers organization had communicated to him that he’d be used at the slot WR position. This position, of course, was perviously occupied by Ted Ginn, which makes sense for a 4.31 burner of Samuels’ ilk. We know from the 2015 and 2016 seasons that this position in a Cam Newton offense is capable of getting loose for the occasional monster play and Samuel is bigger (196 pounds vs. 180 pounds) and faster (4.31 at the combine vs. 4.37-4.45 range at pro day) than Ginn.

Samuel also becomes an immediate option to return kicks and be a “wild-card”-option out of the backfield in possible two-RB pistol sets with Cam Newton and Christian McCaffrey and/or Jonathan Stewart. Samuel does not have the built-in fantasy upside of McCaffrey based on McCaffrey’s projected volume and superior talent. However, Samuel is arguably more talented than his predecessor Ginn, who was a WR2 in 12-team leagues during 2015 and an amenable weekly flex-option in 2016 for upside, even in a miserable year for the Carolina offense.

Dalvin Cook, RB MIN – Cook was one of the biggest disappointments of 2017 for draftniks as his combine testing scores were sub-10th percentile for running backs and completely unrepresentative of the explosiveness and elusiveness Cook showed on film in college. Cook ran a 7.27 three-cone drill, a blistering 2/100ths of a second faster than 300-pound offensive tackle Garrett Bolles (7.29). His 40-time of 4.49 was mildly respectable, but in trying to improve on it at his pro day, that number fell to a 4.53. Even if you don’t put much stock in combine measurables, this sort of disastrous showing is at least indicative of someone who doesn’t prepare well. Add in character concerns (multiple arrests; charged with robbery; charged with battery for allegedly “punching a woman multiple times” outside of a bar in college; charged with criminal mischief for possessing and firing a BB gun in public that caused property damage; charged with a separate incident of brandishing a firearm at a neighbor; charged by Tallahassee Animal Control with mistreatment of animals for leaving three puppies tethered to a heavy chain ‘and the smaller puppies were choking’ per citation report) and you have a player who’s hard to trust at the NFL level to get his shit straight.

We’ve been telling you since the time he was drafted that Latavius Murray sucks, so the competition in Minnesota for touches isn’t as stiff as it may appear to those just looking at the fact that Murray was recently a hot-name free-agent addition. In addition, our own Trashman has proclaimed that Cook is at worst a Mike Gillislee at the NFL level and at best a Lesean McCoy. This sentiment is not one he’s alone in; many in draft circles have been willing to forgive Cook’s many shortcomings based on his electric tape from college, the functional attributes displayed and his elite production/market share in a prolific FSU offense over three seasons. Clearly, he’ll be a divisive subject in both dynasty and redraft circles, and where you value him will be commensurate with your tolerance for risk.

Joe Mixon, RB CIN – Did somebody mention character concerns? We can’t even start talking about Joe Mixon without mentioning his infamous 2014 video tape which featured the then-18-year-old Mixon cold-cocking a female student in the face so hard that it ended up breaking her jaw, cheek and orbital bones. Mixon was suspended for his freshman season by HC Bob Stoops for the incident and didn’t begin his big apology tour until it was clear that no one would draft him if he didn’t. Mixon has since settled with the victim in a civil finding and headed up token youth football camps in his home state of California as methods of image-repair.

The Bengals were reportedly one of only 4-8 teams that had Mixon on their draft boards, which is in some ways unsettling as Dalvin Cook has been just as shitty or shittier a person, only not caught on video. Mixon’s situation in Cincinnati is a good one from a football perspective, and as long as we’re talking about a pure “football perspective” on things, make no mistake, Mixon is an elite prospect. Outside of the character concerns, he’d be our No.2 RB prospect in the draft behind Leonard Fournette. His skill set is reminiscent of Le’Veon Bell with excellent patience and vision as a runner coupled with size and power to break free and speed to go the distance. Add in that he has by far the best hands and natural framing ability of any back in the draft, and we have the potential for a monster in short order out of Mixon.

It’s become clear that the Bengals are not sold on Jeremy Hill for the long-term as trade rumors continue to circulate regarding the soon-to-be third year runner out of LSU who slumped in a big way during his sophomore campaign. Rex Burkhead has been shipped off to the Patriots and Gio Bernard is 1) not a workhorse back in the mold of Mixon; and 2) still recovering from a torn ACL and is a question mark to start the 2017 season. Whether it makes you feel dirty or not, Mixon is going to have to be squarely on your radar for 2017 dynasty and redraft purposes. It’s another case of incredible talent meeting what could be an excellent opportunity.

JuJu Smith-Schuster, WR PIT – Steelers OC Todd Haley said of Smith-Schuster (our consensus No.9 WR in the draft based on talent), was brought in to “create competition,” and he’s already done so as his selection led to a Twitter spat between Martavis Bryant and Sammie Coates about which of the two Smith-Schuster was drafted to replace.

Outside of Twitter feuds, Smith-Schuster is a terrific prospect with, as Haley said at the same press conference was, “a do-it-all-guy, he can play inside or outside.” This goes perfectly with our evaluation of Smith-Schuster, which pegged him as a Stevie Johnson-type weapon who isn’t going to kill you with over-the-top speed, but instead with suddenness – both in and out of routes and after-catch. He’s an elusive player both as a route-runner and with the ball in his hands. When looking at the Steelers receiving corps outside of Antonio Brown, it doesn’t really possess a weapon with the skillset of a Smith-Schuster. Bryant and Coates are both downfield speed weapons and Brown is, well, Antonio Brown. Smith-Schuster is underrated in his ability to get downfield and block with some physicality which reminds you a little of the Hines Ward that this receiving corps has been missing for the last half-decade and he’s more of a pure possession-receiving threat to complement Antonio Brown than Darrius Heyward-Bey.

Even if not used on the outside, Smith-Schuster is certainly a better athlete and more dynamic player than current Steelers slot receiver Eli Rogers. So, while it’s hard to see exactly how he’ll fit in with all the moving pieces in the Steelers WR unit, it’s clear that Smith-Schuster will get his chance early and often somewhere depending on where the other pieces fall. His fantasy stock will be one we’ll have to continue to monitor through rookie minicamps, OTAs and of course, training camp to see exactly how we should be projecting his target share and role in what should be a prolific Ben Roethlisberger offense for 2017.