RosterWatch recently participated in our first REAL fantasy football season-long draft. The field was made of experienced, competitive, SiriusXM radio hosts. We drew the 8th pick in a snake format. The participants and draft order: 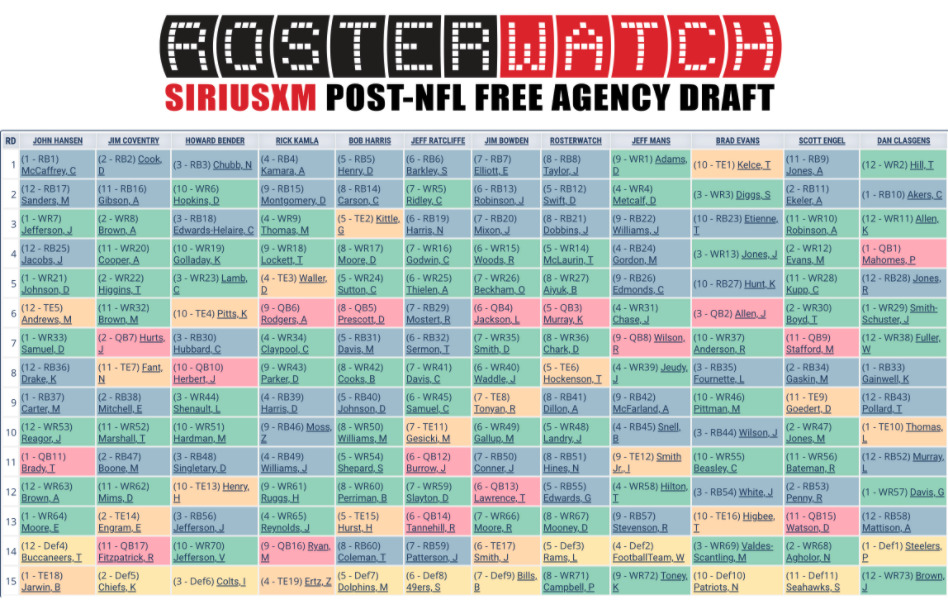 Despite missing most of the year with an injury, Christan McCaffrey is still the consensus 1.1 in 2021. “The Guru” John Hansen selected CMC without hesitation. In the few games McCaffrey did play, he averaged an eye-popping 30 PPR fantasy points.

Sirius host Jim Coventry took the RosterWatch number two ranked player selecting Dalvin Cook. Dalvin has had injury issues in the past but stayed remarkably healthy and productive last season. He is still at his peak, only age 25. Dalvin is an easy call at two overall.

Friend of RosterWatch Howard Bender made the first head-scratching pick at number three. Bender drafted Cleveland RB Nick Chubb. RosterWatch nation knows how much we love Nick Chubb, but he is a sub-optimal pick at third overall. Chubb’s PPR upside is limited with Kareem Hunt projected to have a significant role in the passing game again for 2021. Chubb is RosterWatch’s RB10 for 2021.

Alvin Kamara, Derrick Henry, Saquon Barkley, and Zeke Elliot all went off the board ahead of RosterWatch’s pick. We would have been excited to take any of these players, as they are part of the rare workhorse RB tier. All have more risk than prior years due to QB changes, season-ending injuries, or mileage starting to stack up.

Team RosterWatch was GIFTED, “Golden Son,” Jonathan Taylor at pick eight. We were prepared to take Aaron Jones if Taylor did not make it to us. Bender’s pick of Chubb at three ensured we would get one of our top-tier runners to anchor our daft. Taylor may lose some receiving work to Nyheim Hines, but the Colt’s elite offense should afford Taylor many scoring and yardage opportunities to make him worth a first-round pick.

Davante Adams went to Jeff Mans at pick nine. Adams will be the consensus WR1 this season and is certainly worthy of a first-round pick in 2021. Adams has a high floor high upside combo, unlike any other WR. In leagues where you must start three WRs plus a flex, Adams is a high-end foundational pick.

Travis Kelce, drafted 10th overall by Brad Evans,  won teams their fantasy leagues in 2020. Kelce’s fantasy output would rank him as a WR1 last season. Now age 32, the great TEs tend to age well. Kelce is a defensible first-round pick, but there is an opportunity cost to passing on RBs and WRs. Drafters of first-round TEs, tend to “chase” the draft and end up reaching for RB/WR shortly after.

Aaron Jones fell to fantasy veteran Scott “The King” Engle. RosterWatch co-founder Byron Lambert noted he may have drafted Jones over JT. Jones will likely lose some goal-line opportunities during the regular season to second-year RB AJ Dillon. Jones doesn’t project to be a 250 carry runner, more of a 215 rush projection is reasonable. However, Jones’ passing game work could spike and buoy his fantasy value.

Tyreek Hill was the last pick of round one. Hill is a volatile week-winning player. He doesn’t have a weekly floor that some of the other top WRs have, but he has a unique ceiling that makes him a sharp first-round pick, Dan Clasgens later paired him with Patrick Mahomes, a fantasy stack made in heaven.

Best Value Picks of the Draft

Darren Waller went to Rick Kamala at pick 5.4. Waller was TE3 in this draft. Kelce, Kittle, and Waller are the consensus tier one TEs. Getting Waller 24 picks after Kittle is one of the best values in this draft.

A BIG win for the RosterWatch Cheat Sheet, as it directed us to draft Terry McLaurin at pick 4.5, WR14. Terry McLaurin is a great bet to return top 10 value. To get him in round four after we drafted three workhorse RBs, resulted in RosterWatch drafting from a position of strength for the next few rounds.

RosterWatch will be encouraging our subscribers to be aggressive on “the big eight” QBs this season. For the last decade “wait on QB” has been a sharp strategy. Last season revealed that there are a handful of QBs that give you a competitive advantage. However, if you miss out on that group of difference-making QBs, there is pivot play. John Hansen snags Tom Brady on the 10/11 turn. Brady has all of his weapons returning and looks like another 4,600 yards and 40 TDs season is well within his range of outcomes.

Best Sleeper Picks of the Draft

Jeff Ratcliffe lands new Washington Football Team WR Curtis Samuel at 9.6, WR45. Samuel has been a popular breakout candidate for the last couple of seasons. His draft-day price the last few years did not bake in the obvious risk of low volume. In 2021 Samuel is priced on his low-end range of outcomes. Curtis Samuel makes for an interesting WR4 at cost.

Team RosterWatch was targeting Colts WR Parris Campbell starting in the 12th round. We played chicken and ended up securing him in the 15th round! Prior to his two seasons of bad injury luck, Campbell profiled as an offensive weapon who can be moved all over the field. Campbell has the upside to be a top 15 WR, but injuries have made fantasy football players move on from him. Campbell is an easy pick in the 15th round, that we can easily move on from if he starts slow.

Kyle Pitts 6.10; TE4 – RosterWatch is HIGH on Kyle Pitts for dynasty. In redraft, it is a poor bet that a rookie TE finishes in the top 10.

Javonte Williams 3.9; RB22- The pick makes sense as the RB pool gets ugly quickly. Without knowing the landing spot, and a recent history of rookie RBs starting slow; it is questionable to pass on talents like Allen Robinson, Terry McLaurin, Patrick Mahomes, and DJ Moore to reach for your RB2.

James Robinson 2.6; RB13 There is no denying how great Robinson was in 2020. What makes it a sub-optimal pick is that Robinson still has risk before the NFL draft occurs. The Jaguars have plenty of picks to add a premium runner. We are in on J-Rob, but he was drafted before RosterWatch Nation Golden Son, Antonio Gibson.

In conclusion, our first redraft league was a success. Participating in a draft in April with knowledgeable competitors is a great way to gauge our evaluations versus the market ADPs. The real NFL draft will almost certainly change the value of some veteran players.

Comment below who you believe are the best picks of this draft.