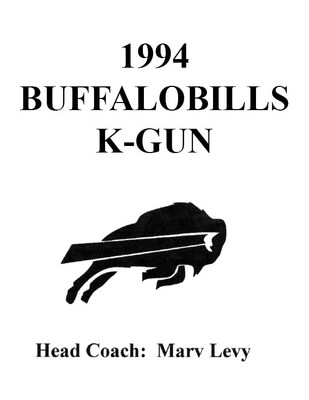 New HC Doug Marrone and OC Nathaniel Hackett bring with them from Syracuse a conceptual version of the West Coast offense that, ironically, came from Buffalo’s Jim Kelly offenses of the 1990s. The offense is not, however, named after Jim Kelly as is widely thought. It is named after a tight end.

The K-Gun was named after Keith McKeller, a big and tall TE agile enough to exploit seams in the timing-based attack that opened things up all over the place to get players like Andre Reed and Thurman Thomas free in space.

It makes a fantasy owner drool over the potential of owning C.J. Spiller in this type of system. Chan Gailey was far too cute with Spiller and only used him in traditional, non-gadety ways when forced to out of necessity via Fred Jackson injury or when the season was already lost.

Nathaniel Hackett is going to use C.J. Spiller like Thurman Thomas.

The “Andre Reed” in this case would be Stevie Johnson, a player that Bills GM Buddy Nix has always growled about needing to play at the slot WR position. Andre Reed was a player who practically invented the modern incarnation of the slot role, and it’s a shame he is not in Canton yet.

Johnson is not Reed, but when he’s healthy, he’s a double-digit scoring player week-in and week-out in standard leagues and even better in PPR as he’s averaged over five receptions per game over the last two seasons with Ryan Fitzpee-pee throwing him urine-soaked ducks.

Unfortunately for TE Scott Chandler, after some tape review and statistical study of both the Buffalo Bills teams of the 1990s and Marrone’s recent Syracuse teams, the tight end basically plays the same role: Slim to none given a few outlier games. Ryan Nassib threw for three touchdowns to his tight end in Syracuse’s 2011 win at West Virginia, but in 2012, the injured group was a barely-utilized platoon.

Keith McKeller—the guy who the offense was named after—never scored more than 5 TDs in one season, and in that season only had 43 receptions, also a career high.

Scott Chandler blew out his ACL in Week 16 of 2012, so unless he is Adrian Peterson or Jamaal Charles (which, admittedly, may be becoming the new “normal” given medical advances), Chandler will certainly be a little bit behind in learning the new offense to say the least.

Plus, as mentioned the TE in these systems was generally not utilized with any great frequency as a receiver, anyway. The offense is said to be named after McKeller because his agility and length simply made the setup possible.

Behind Chandler on the current TE depth chart in Buffalo are three guys who were all waived last season or in 2011 and have been bouncing around practice squads and injured-reserve lists.

While the proposition of the tight end in an offense named for the tight end’s role sounds intriguing, it is not certain to be. Even though Marrone was an “offensive coordinator” under Sean Payton, and knows the “Gulf Coast Offense” which, like the K-Gun, is a west-coast system—it doesn’t mean every TE will be a Jimmy Graham.