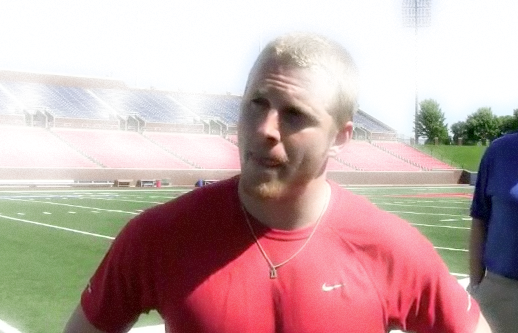 When slot receiver Jordan Shipley was waived by the Bengals last week, we thought a perfect landing spot would be in Dallas where the slot is still up for grabs.

I was perplexed when the Cowboys passed on the ex-Longhorn star, who would have been a fan favorite in Dallas, until I watched Dallas’ preseason match-up with San Diego on Saturday night. It seems that America’s team already has an up-and-coming slot receiver in one Cole Beasley.

Beasley, an undrafted free agent who did his college time at neighboring Southern Methodist University, racked up 104 yards on 7 receptions against the Chargers to lead all receivers. This kind of performance is just an extension of what Beasley does in practice, according to teammates.

But it almost didn’t happen, as Beasley had walked away from the Cowboys the first week of August, saying his heart wasn’t in it. After a two day gut check, which probably involved the potentiality of a check of another sort (always the cynic, I know), Beasley checked back in to camp to the organization’s surprise and has been turning heads with his playmaking ability.

The 5’9″, 177 pounds Beasley has undoubtedly drawn comparisons to Wes Welker, who also went to school in North Texas, but whether he will make a similar impact on his team is uncertain at this point. There is of course somewhat of a logjam behind Dez Bryant and Miles Austin that will have to play itself out.  The second team All-Conference USA Beasley has gotten off to a terrific start though, and could potentially be worth a flyer in keeper leagues(and perhaps redrafts) should he continue to flourish as he did this Sunday.