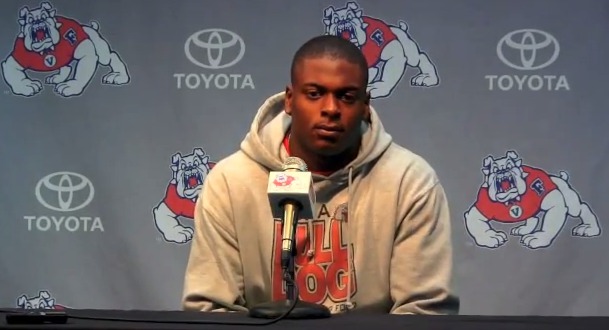 Adams ended his collegiate career as the nation’s leader in receptions (131), receiving yards (1,718) and receiving touchdowns (24). This is in major part due to the aggressive aerial assault led by Derek Carr and Fresno State this past season. Adams is not without his own respectable skill set though. He’s an excellent route runner who can catch balls in the smallest of windows. At 6’2”, with impressive leaping ability, he’s a lighting rod for touchdowns, which is useful considering he’s lacking in speed for a wide receiver. Adams’ 24 TDs led all FBS players by at least 8, and is at least equal to 87 of the FBS’ 123 teams total TDs. That relative slowness might be what sinks him in the NFL though. Professional DBs won’t have a problem keeping up with Adams like college DBs did. He also has a penchant for dropping balls that should be caught. Adams was reportedly given a third-round grade by the NFL advisory committee before electing to leave after finishing his junior season.

Adam’s speed issues have him projected as primarily a possession receiver in the NFL. He doesn’t hustle to break free and he’s not elusive by pro standards. His saving grace will be his presence in the red zone and the potentially high number of targets that may come his way. Adams could make an immediate impact on any given team with that scoring potential.