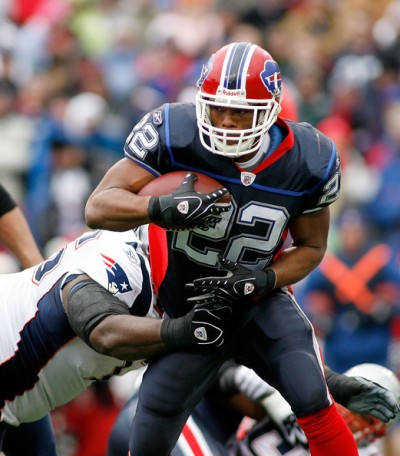 I’ve been accused of being a year too early on fantasy players before. My philosophy? I’d rather be a year early than a year late. You know, ahead of the curve. Not behind it. Even though I found the Bills top ten pick in the 2010 draft to be curious, after I saw C.J. Spiller look like Barry Sanders in preseason I couldn’t help but think I was on the cutting edge. Well, not so much! Fred Jackson emerged as a better three down option for Buffalo and Spiller’s rookie stock spiraled down the vortex of fantasy irrelevance.

Fast forward to the Jackson injury last year and we finally got a glimpse of what C.J. Spiller has to offer as a fantasy running back when he gets the touches. Over the final six games of the 2011 regular season Spiller averaged 18.33 touches/game for over 105 yards/game and 5 TDs. His average fantasy production over that time was 15+ points/game with a low score of 5.6 points and high score of 28.7 points. All very useful production.

As quickly as Spiller’s fantasy stock was gaining momentum though, it has come crashing back down to earth. The Bill’s have recently signed their very productive veteran RB Fred Jackson to a contract extension. He will be the featured back and workhorse in Buffalo. I wouldn’t be surprised if Chan Gailey goes back to giving Spiller some reps at WR but his touches will take a major hit. While he may not be fantasy irrelevant this year, expectations must be tempered for C.J. Spiller heading in to 2012.