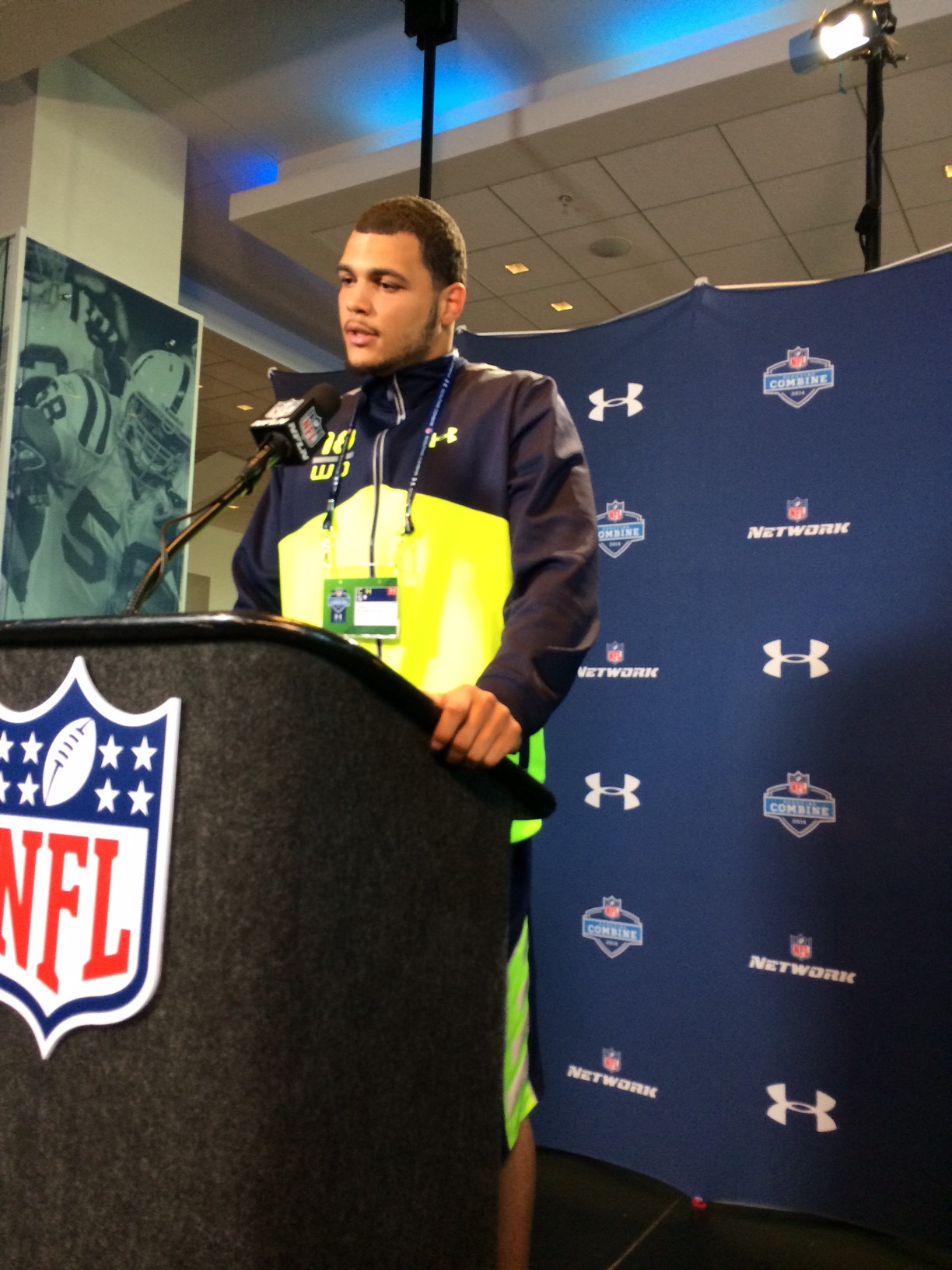 While watching live passing drills from the PFWA viewing suite inside of Lucas Oil Stadium, we only write the numbers of the players down as we transcribe these remarks. It’s like opening presents when we go back to identify and assign names to the notes.

A couple of the smaller name guys who stood out in drills were- Bruce Ellington, Brandin Cooks, and Jeremy Gallon. 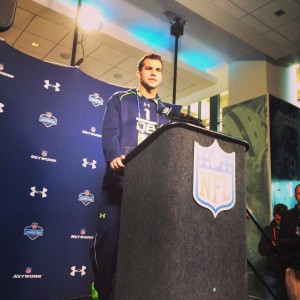 #1 Blake Bortles, Central Florida
A bit of a floater in the 1/2 speed drill on the fly pattern
Second throw is better, albeit a bit overthrown- WR could have hustled more
Listens to instructions to hit the outside shoulder deep, make a beautiful throw
Doesn’t have the quickest release on the quick slant
Looking good on the 17 yard dig
Sufficient arm strength on the deep fade, throws it on a rope
Not a ton of velocity on 10 yard out to the right side, throw is sufficient though
No anticipation on 12 yard comeback, waiting until the WR is in open window
Beautiful throw on the post corner
Loads up with a deliberate delivery on post corner
A bit disappointing on the fade

#5 David Fales, San Jose St.
Nice deep throw in the 1/2 speed drill to the fly route
Beautiful deep ball
Overthrows WR, decent ball though
Looks just like he did at the Senior Bowl
Throwing floaters on the 10 yard out
Struggle on 17 yard dig route
Recovers with a solid throw on the dig
Like Senior Bowl, has to rotate his whole body to throw fade w/ power- creates velocity, and is accurate though
Two nice throws on 10 yard out to the right
Looks good on 12 yard comeback

#6 Jimmy Garoppolo, Eastern Illinois
Throws the nicest deep ball of all QBs, so far
Another nice deep ball
Looking great with timing, and release on quick routes
Throwing nice short balls with zip to WR in gauntlet drill, he stands out here
Continues to drop the ball in the bucket
Very solid throw on the quick slant- good release- he’s an ideal candidate for a WCO
Solid on the 10 yard out
Footwork is a bit weird causing inaccuracy on first two attempts on 17 yard dig, third and fourth attempts are better
Solid throw on the fade route
Really good on three throws to the 12 yard comeback- he’s the best so far in this drill

#7 Jordan Lynch, Northern Illinois
A floater on the out
Shows a nice deep arm
A couple more weak throws, these down the field
Too much loft
Low and inaccurate on 17 yard dig
Throws floaters on the fade route
Throws a floater on the post corner

#10 AJ McCarron, Alabama
Weak throw on the deep ball
Throwing a weak ball that’s behind the WR in second gauntlet drill
Looks better on the quick slant
Horrible first throw on 10 yard out, a floater that is inaccurate- better on the second attempt
Looks better on 10 yard out to the right side
Decent on the 12 yard comeback, like he’s finding the soft spot in the zone w/ anticipation
Throws off his back foot on all three attempts at the fade route, but the balls were pretty and traveled 50 yards in the air

#1 Jared Abbrederis, Wisconsin
A drop and a body catch in the gauntlet
Drops the quick slant
Pedestrian on the 10 yard out
Breaks down well on the 17 yard dig

#2 Davante Adams, Fresno St.
Beautiful hands, catching out front in gauntlet drill
Looks like a JAG, in second run at gauntlet- one body catch
Decent 17 yard dig
Horrible route on the 10 yard out to the right side

#3 Odell Beckham, LSU
Hands like a vacuum, catching out front and running straight in gauntlet
Looks fast and really good in second gauntlet drill to the opposite sideline
Electric on the quick slant
Not quite as good on the out, but still looking solid
A bit slow off the line, but a decent cut on the 17 yard dig
Soft hands on post corner, decent route

#4 Kelvin Benjamin, Florida St.
No drops in first attempt at gauntlet, overall looks natural in both runs at this drill
Slow off the line on the quick slant
Cannot break down on the 10 yard out
Better on the 17 yard dig, still just a bit tough for him to break down
Could show better effort on dig, appears to waste motion
Makes a better cut off his left foot, much better break on 10 yard out to the right
Another solid cut to the right on 10 yard out
Much better here, on the post corner- not so much breaking down in this drill- gets downfield all right

#5 Christopher Boyd, Vanderbilt
Lets the ball in too close to his body in first gauntlet attempt
Decent run in second gauntlet drill, finishes with a nice hands catch on a high ball
Pedestrian route on 10 yard out

#7 John Brown, Pittsburgh St.
Not going full speed, makes solid catches
Solid second run at gauntlet
Nice route on the quick slant
Doesn’t break down well on 10 yard out
Solid route on 10 yard out to the opposite side (right)
Great catch on the post corner

#8 Martavis Bryant, Clemson
Extends long arms to catch the ball out front in gauntlet
Long-armed catches the ball out front, recovers well from one dropped ball
Doesn’t break down well on 10 yard out
Labors to run a horrible route on 17 yard dig
Can move well downfield on fade route

#9 Isaiah Burse, Fresno St.
Doesn’t run the drill straight down the line, overall nice hands with one drop in first run at gauntlet
A couple of body catches in gauntlet drills
Looks like a JAG on the quick slant
Doesn’t break down well on 10 yard out
Bad dig route
Moves well downfield on fade route

#10 Michael Campanaro, Wake Forest
Runs hard with no drops in first attempt at gauntlet, too many body catches in the second attempt
Doesn’t break down well on 10 yard out
Best 17 yard dig of all WR so far
Three nice throws downfield on the fade, uses anticipation and is accurate deep
Horrible route on the post corner, doesn’t follow directions to the drill at all-make his cuts way short of cones

#14 Damian Copeland, Louisville
Nice route and catch
Body catches almost every ball in first gauntlet drill
Solid second run at the gauntlet
Seems like he got hurt at some point

#18 Mike Evans, Texas A&M
Nice vertical route, catches over the shoulder to the outside
Looks good in first gauntlet drill
Looks a bit slow in second gauntlet drill
Horrible in his break on the quick slant, labors to sink hips and break down
Labors off the line on 10 yard out, but breaks down better than Benjamin
Very good route on 17 yard dig (Michael Floyd-ish)
Runs a nice fade route, but drops ball
Good break for a big guy on 10 yard out to the right
Hands catches the out
Breaking down well for a big man, looks solid on 12 yard comeback
Trouble in his second break on the post corner
Great adjustment on second attempt at post corner

#19 Shaq Evans, UCLA
Runs a nice gauntlet, looks fast and makes catches in rhythm- drops the final ball, lets the ball in on him a tad
Good out pattern
Smooth route on 17 yard dig, could still break down a bit more
Solid route and catch on 17 yard dig
Effortless on the dig

#21 Austin Franklin, New Mexico St.
Three drops in first attempt at gauntlet
Bad discipline on second attempt
Nice cuts on post corner, but should have made a tough catch and didn’t
Make lemonade out of Tajh Boyd lemons on fade route

#24 Charles Hazel, Coastal Carolina
Solid in gauntlet drills, one drop
Good slant route
Some wasted motion on the 17 yard dig, but looks explosive
Rounds off his cut on the 10 yard out
Poor post corner route