Inside the 2014 NFL Scouting Combine: QB/WR Session 2- Notes on Every Drill
Byron Lambert, Rosterwatch.com, All photos by Alex Dunlap, RosterWatch 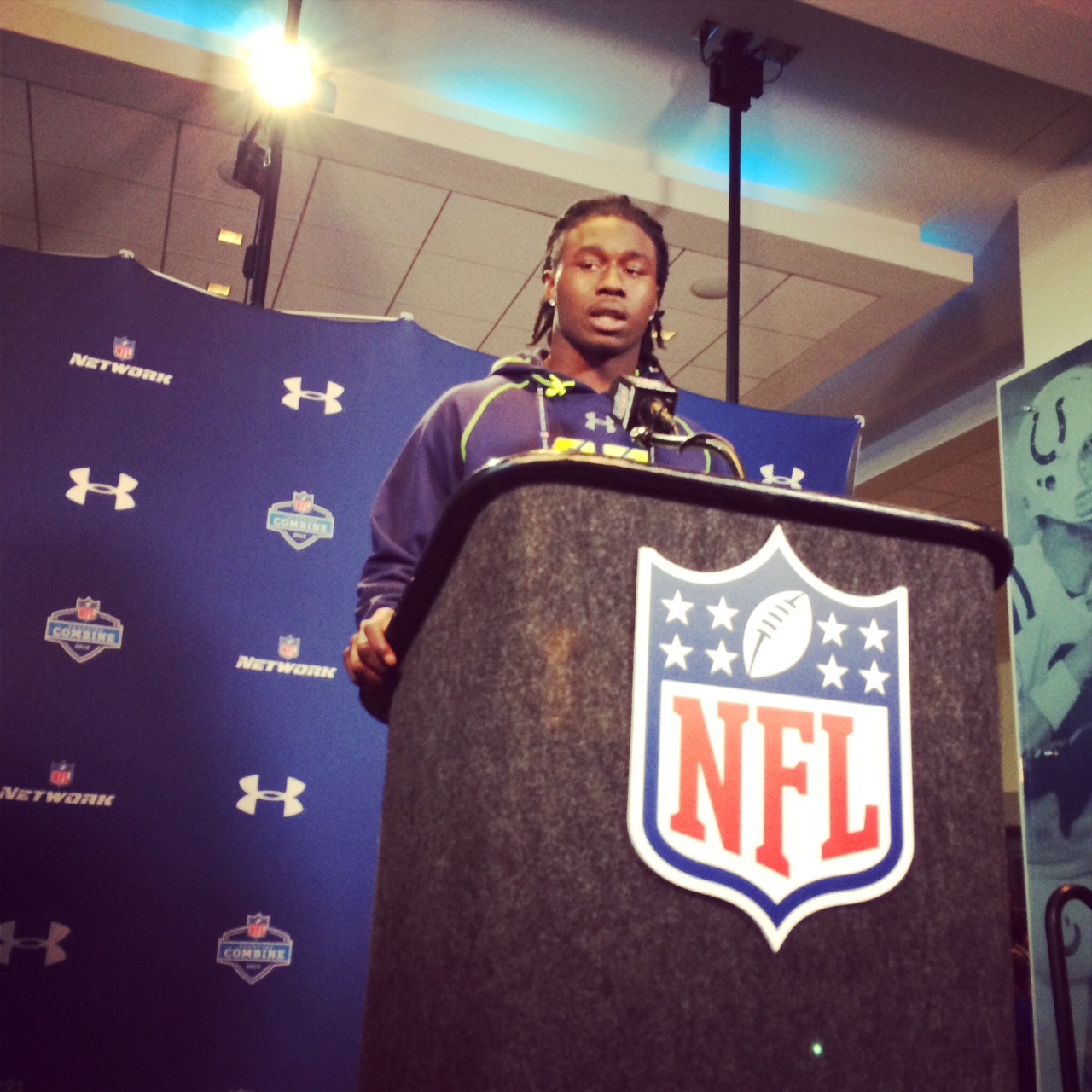 One of our favorite annual activities is attending the live QB/WR throwing sessions inside the PFWA’s private viewing suite at Lucas Oil Stadium, home of the NFL Scouting Combine.

We take notes on every drill, and virtually every individual rep. Going back through these remarks has been very telling to us in the past, enabling us to uncover players like Ace Sanders months in advance. Right now, from this group- Sammy Watkins, Kevin Norwood, and Jordan Mathews are on our radar BIG-TIME.

#14 – Bryn Renner, UNC
-Good looking ball in 1/2 speed fly drill
-Weak throw in 2nd attempt at 1/2 speed fly drill
-A real pee-pee arm
-Another wet noodle throw
-Long delivery, decent ball on 7 yard slant drill
-Tries so hard to create velocity on 17 yard dig, not fluid in his drop
-Ugliest throw of the whole combine on deep route – Watkins has to slow down to catch it

**There are no notes on Stephen Morris, because just like Senior Bowl- he sucks. We know exactly what he is.

#25 Robert Herron, Wyoming
-Looking good in the gauntlet
-Lackluster in gauntlet drill in opposite direction
-Bad at getting upfield quickly after 10 yard out, has trouble running
-Great adjustment and soft hands post corner

#30 Tailer Jones, Notre Dame
-Solid first attempt in gauntlet drill, with one drop
-Struggles a bit catching the ball in gauntlet drill in opposite direction
-Sloppy route on 10 yard out
-Makes an amateur drop on fade

#33 Marquise Lee, USC
-Lets the ball get too far in on him in gauntlet drill
-Not a great route on 10 yard out
-Shows good body control, doesn’t look that fast
-Body catch on post corner route
-Great body control, great catch on dig route
-Again excellent body control on the out

#35 Jordan Matthews, Vanderbilt
-Looks very good in first attempt at gauntlet drill
-Quiet, solid hands catching out in front of his body in gauntlet drill to opposite side
-Does the Jerry Rice practice habit on 7 yard slant and runs it all the way to the end zone
-Bad route and drop on dig
-Great out route

#36 Donte Moncrief, Ole Miss
-Lets the ball get too far in on him in first attempt at gauntlet, a couple of drops- slaps hands loudly
-Lets the ball get in on his body on 10 yard out
-Looked a bit slow in routes
-Looks slow on fade route

#37 Kevin Norwood, Alabama
-One drop, otherwise very smooth and sleek with some nice catches in first attempt at gauntlet
-Solid run in gauntlet drill to the opposite side
-Nice cut on 7 yard slant
-A bit deliberate in his 10 yard cut
-Unbelievably sick catch on a beautiful post corner route

#38 Walter Powell, Murray St.
-A double catch and a body catch in his first attempt at the gauntlet
-Explosive route on 17 yard dig
-Short arms a catchable ball on post corner route

#39 Tevin Reese, Baylor
-Looks smooth in 1/2 speed fly drill
-Lets the ball get in on him too much in first attempt at gauntlet, one body catch and a double catch
-All body catches in gauntlet drill to opposite side
-Explosive route on 7 yard slant, but drops ball
-Nice route on 10 yard out
-Couldn’t secure tough catch on post corner out in front, should have been able to make it
-So fast setting in to deep 12 yd hitch

#40 Paul Richardson, Colorado
-Nice hands on catch high above his head in 1/2 speed fly drill
-Lets the ball into his body a little bit too much in gauntlet drill to opposite side, one body catch
-Body catch on 17 yard dig

#41 Allen Robinson, Penn State
-Good adjustment on ball over his shoulder in 1/2 speed fly drill
-Not good in first attempt at gauntlet- sloppy drop, two body catches
-Lets the ball get too far in on him in gauntlet drill to opposite direction, and runs stiff
-Bad route on 10 yard out
-Double catch on 17 yard dig
-Horrible at breaking down on 12 yard curl
-Body caught all his slant routes

#42 Jalen Saunders, Oklahoma
-Solid attempt in gauntlet drill, one drop early threw his timing off a bit in first rep- but second run was clean
-Nice, quick route on 7 yard slant
-Horrible break, where he completely telegraphs his route w/ wasted motion on 17 yard dig
-Better route on 10 yard out – better than on the dig earlier
-Too much pitter-patter and wasted arm motion, telegraphs everything

#44 Josh Stewart, Oklahoma St.
-Decent first attempt in gauntlet, but ran at half speed
-One body catch in second attempt at gauntlet
-A garbage dig route
-Horrible body catch the on the curl

#45 Devin Street, Pittsburgh
-Decent first attempt in gauntlet, solid at extending his arms to make the catch
-One body catch in first gauntlet, one drop in the second
-Solid 10 yard out

#46 L’Damian Washington, Missouri
Fighting the football in gauntlet drills
-Bad 10 yard out all round, Stephen Morris can be blamed for his share of the garbage
-Solid 10 yard out
-One sloopy dig, one really nice dig

-One drop on the short out
-Soft hands on the 1/2 speed fly route
-Gauntlet drill comes so easy to him- catches the ball way out front arms extended with his hands
-One drop in first gauntlet attempt, but ran the drill very hard and very fast
-He’s a different animal than the others in the gauntlet drill
-Looking sick on 7 yard slant
-Rounds off his cut a bit on the 10 yard out, but does explode out of his cut
-Good cut on 17 yard dig route, extends arms in a very sick way for the catch
-Extreme acceleration out of cuts
-Best breakdown by a mile of all WR in 12 yard curl
(1 drop in 1st gauntlet, 2nd run sick)
(accelerates sick out of 10 yard out)
(1 bad Dig route)
(1 x Sick Dig)
(1 x sick on fade w/ hitch down left side)