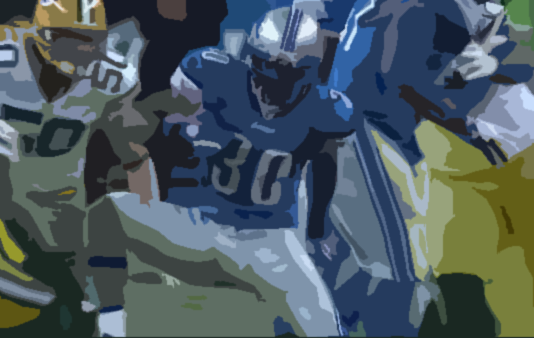 Matt Ryan won the 2008 NFL Rookie of the Year award by a landslide, but the one-sided victory shouldn’t have been mistaken for a lack of offensive talent in that year’s draft class.

The rookie class of 2008 consisted of receivers Eddie Royal and DeSean Jackson, running back names such as Chris Johnson, Matt Forte, Ray Rice, Jonathan Stewart, Jamaal Charles and one of the more intriguing players coming into the 2012 fantasy season: Kevin Smith of the Detroit Lions.

Selected in the 3rd round of the 2008 NFL draft, Smith led the Lions in rushing attempts, rushing yards, and delivered eight touchdowns on the ground. Even though Smith was benched after week four in 2008 in favor of Rudi Johnson, he still managed to amass a rushing average of 4.1 yards per carry over 238 carries.

Add another 39 receptions and 286 yards through the air for 277 total touches. Extrapolate the data and it shows 4.6 yards a touch, earning fantasy owners that year on average 15.1 points per contest.

In 2009, Smith put up 184 fantasy points through 13 games, or, 14.1 points per contest. A knee injury ended his season during the team’s week 14 contest against Baltimore.

Smith fell off the fantasy map after missing half the 2010 campaign recovering from the previous year’s knee injury and then a troublesome thumb injury. By now, Smith had lost hold of the starting job to rookie Jahvid Best.

Smith was falling into fantasy irrelevance, and apparently was also losing faith within the Lions coaching staff. All this lost faith in Kevin Smith within the organization and with fantasy owners mustering a meager 6.0 points a game.

Will Leshoure be healthy enough to have an immediate impact after last seasons Achilles injury despite it happening early in the season? Not only contending with the Achilles injury recovery Leshoure also spent most of his offseason not in weight rooms and rehab facilities but instead mucking it up with the boys and being arrested for a couple of marijuana possessions. Does this speak well to those who would have rather seen him spending the offseason performing a proper intense rehab regimen? Likely not and it has shown early in camp.

Leshoure is already nursing a hamstring injury early and Jahvid Best if facing a well-known battle to get back on the field from what appears to be a high susceptibility for concussions.

This situation has Kevin Smith poised to be a comeback player of the year for both the Lions and fantasy owners.

Last season, Smith came on like a wrecking ball in spot duty for both injured Leshoure and Best after not being on the Lions roster at the start of the 2011 season. For the lucky individuals that did manage to acquire Smith, he provided a spark for fantasy owners by averaging 18.3 points per game yet only a 12.8 per game yield during designated start assignments.

Based on projections (assuming Kevin Smith can start or at least participate in 14 games) we believe he can average 14.7 points per game.

The projections are just that. A hypothesis based on a number that is believed to be reasonable taking all factors into consideration. The stars are aligned for Kevin Smith to start, and his talents and skill set could do the rest.