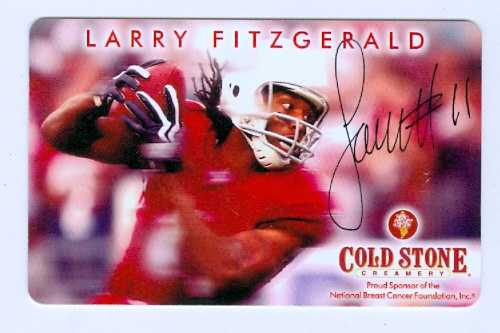 Yesterday, during ESPN’s SportsCenter segment, Arizona Cardinals wide WR Larry Fitzgerald was asked who would be the logical choice, between himself and Detroit Lions wide out Calvin Johnson, when stocking a fantasy football squad for the upcoming 2012 fantasy football season.

Fitzgerald’s response? As many expected, the Arizona star receiver chose the high road and the road backed up 2011’s empirical stats. Megatron hooked up with QB Matthew Stafford 96 times last season resulting in 1681 receiving yards and 16 TDs, and compelling Fitzgerald to express his thoughts:

By no means is the Arizona star receiver a slouch himself. Not by any stretch of the imagination. Even with the quarterback dilemma in Arizona, Fitzy still managed 80 receptions in 2011. Although Larry Fitzgerald’s total catches in 2011 actually dropped by 10 from the previous season, he was able to increase his yards per reception significantly from 12.6 Y/R to 17.6 Y/R in 2011 by taking 80 receptions and increasing his receiving yards by a whopping 24% for 1400 and some change.

Only Victor Cruz of the New York Giants managed a higher yards per reception average amongst NFL wide outs with 70+ plus catches. Fitzgerald could be considered a pillar of stability within the Arizona Cardinals offense, never playing in less than 15 games per season except in 2006 when Fitzgerald played in 13 contests. He has caught 90 or more balls in five of his eight seasons in the league.