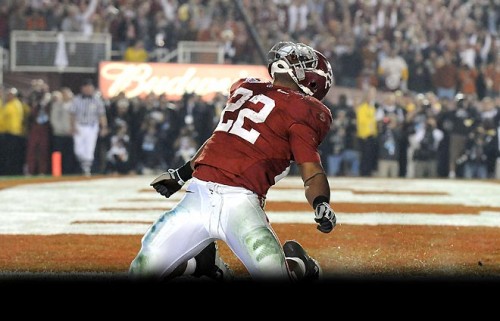 A bruised heel. I put it on par with turf toe, plantar fascia and the like. Basically, the types of injuries that we, as idiotic fans, cannot begin to comprehend regarding pain and discomfort. “It is a bruise. Play on it. You are killing my fantasy team.” These were the thoughts of many fantasy players who owned Saints rookie RB Mark Ingram last year.

A bruised heel is brutal. It is something you do not want to ever hear about anyone getting. It isn’t really even a bruise. It is a violent displacement of the critical “padding” under your heel that allows you to walk (or run, cut and sprint) without grinding your actual heel bone into the earth with every step. Some cannot walk for weeks following the injury occurring. Terrible. Mark Ingram had that going on as a rookie.

Now, the news has come out that Ingram will be getting his second offseason knee scope in three seasons. He will be ready for the preseason practices, but fantasy players will now be even more spooked. They don’t understand how much worse a bruised heel is than a simple scope procedure. I anticipate his current ADP of 77 (7th round) to drop as low as mid-eighth, possibly ninth round. At this point, put on your ski mask and make a steal.

It’s the classic reverse overreaction. When Ingram came into the league as a Saint, fantasy owners overreacted. They generally thought the same way people are thinking about Trent Richardson this year regarding talent level. After all, the two Alabama backs are strikingly, eerily similar in size and style. So much so, that I asked Alabama defenders Courtney Upshaw and Dont’a Hightower at the NFL Combine to give thoughts on how they compared the two, given so many obvious similarities the two share as backs. My business partner, Byron Lambert, actually asked Richardson to compare himself to Ingram.

The NFL situations the two came into are different, though. People who drafted Ingram in 2011 fantasy drafts thought, “this is a dynamic, powerful back in a prolific scoring offense that will be given plenty of opportunities despite competition for snaps from guys like Pierre Thomas and Chris Ivory.” They didn’t factor in Darren Sproles as much as they should have realistically, and also dismissed that he was a rookie in a complex system with no time to learn it in the 2011 shortened offseason.

This resulted in Ingram being drafted in the 5th to 6th round of 2011 fantasy football drafts. An RB, who at this draft slotting, you need to have true confidence in as a solid flex starter, (and need to see potential in) for RB2 or even RB1 upside. Ingram fantasy owners did not get that last season, due to the fact that he missed 6 games and managed to put up a few initial stinkers to start the season, even when given consistent double-digit carry opportunities. He did score 5 touchdowns, and had a few very serviceable games.

Pierre Thomas only had double digit rushes once last season (when he received 10 carries.) That was in a game in which Ingram sat out. Ingram, when healthy, was consistently featured on first and second downs, most certainly given goal line opportunities, and most importantly, used almost exclusively in Saints garbage duty as they tried to run the clock to protect the lead.

Regardless of Sproles’ involvement in the screen game and in hurry-up packages, Ingram averaged 12.2 carries per game and managed to rack up a TD every other week. To me, this is impressive, as he was hardly ever able to practice on Wednesdays while nursing the lingering heel injury. Wednesdays are the most important day of practice during the week for rookie RBs, because that is when the first and second down game plan is installed. Remember that when checking injury reports this year.

Assuming Drew Brees will be back, I anticipate a much better showing out of Ingram this season and I am not overly concerned about the “risks” to his touches in Thomas and Ivory that didn’t even affect him much as a completely lost rookie back who was playing hurt. Any time you think you can get an eight touchdown, 900 yard 4th RB in the 9th round, you are committing robbery. If you get an 11 touchdown, 1100 yard back, well, you are committing, and getting away with murder.