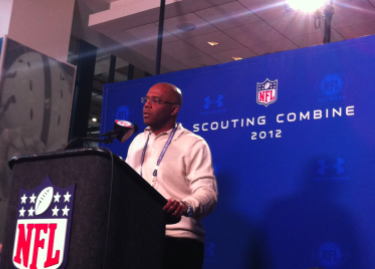 Lions GM Martin Mayhew does not want to use the franchise tag on Cliff Avril, their talented defensive lineman with an expiring contract. He said “We don’t want to use the tag on him, but more importantly- we don’t wanna lose him.” When asked if the franchise tag could possibly be used with the expectation that it would extend the amount of tim for the two parties come to a long-term deal, he said that it was indeed a possibility.

He also said that his perceived symbiotic relationship with Head Coach Jim Schwartz is based more in philosophy and desire to present themselves as a united front more than it is in similarity of personality.