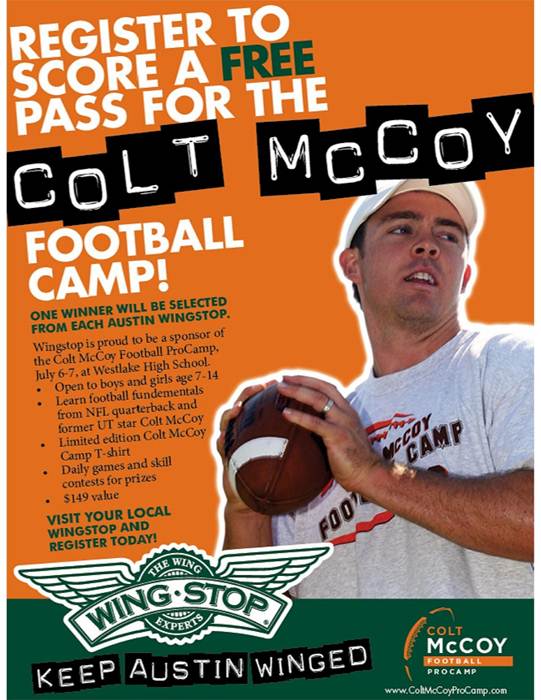 While rookie Brandon Weeden has been taking the majority of snaps in Browns OTA’s with the first team, third-year QB Colt McCoy has openly stated that he views the competition for the starting QB job in Cleveland to be wide open.

This sentiment was echoed in a press release that was sent to various Austin media regarding the Colt McCoy football camp set to kick off in Austin on July 6th. If Brandon Weeden is the new starter in Cleveland, apparently Colt McCoy’s representatives did not get the memo.

RICHARDSON, Texas – (June 11, 2012) – Football season doesn’t officially start for a few months, but a group of Austin-area kids will have a chance to play with one of the best when the Colt McCoy Football Camp kicks off July 6-7 in Austin.

As a Colt McCoy Football Camp partner, Wingstop of Austin will sponsor nine kids to attend the two-day event. Campers will have an opportunity to play football and learn the basics from former UT star and starting quarterback for the Cleveland Browns, Colt McCoy.

The Colt McCoy Football Camp will be held at Westlake High School and is open to boys and girls ages 7–14. The experience includes time on the field with McCoy, a limited edition camp T-shirt, games, skill contests for prizes and more.