– The story of the day in Fayeteville was WR Greg Childs, who ran a 4.41 forty time. This was a large improvement from the 4.55 he ran at the NFL Scouting Combine in Indy. The scouts I spoke to in Indianapolis warned me that Childs was not to be ignored as a prospect when I indicated I did not see him in the same league as fellow Razorback WR Joe Adams. He certainly proved their sentiment correct today, turning in a 40.5 inch vertical jump, which was a 4-inch improvement from the 36.5 inch leap he registered previously. Childs has now propelled himself to definite mid-round territory, with pundits today reacting by bumping him as high as the third round in some mock drafts. Childs is a tall WR at 6’3″ and has put on almost 10 very healthy pounds since the Shrine Game where he weighed in near 210. Today he tipped the scales at 219 and looked “extremely cut”. It seems Childs has fully recovered from the 2010 torn patellar tendon injury that sidelined him from the end of the 2010 season well into his 2011 season. Talk about throwing a wrench in things. Had Childs not been injured, he was widely assumed to come out as a much-heralded Junior prospect. Childs said afterward “I came out here and I had some scouts tell me, ‘You look 100 percent. You look as explosive as ever.’” He has great hands, height and leaping ability to couple with the newly-recovered elite speed he put on display for over 25 NFL teams today. Keep an eye on this guy. He can do things like this to Dre Kirkpatrick: 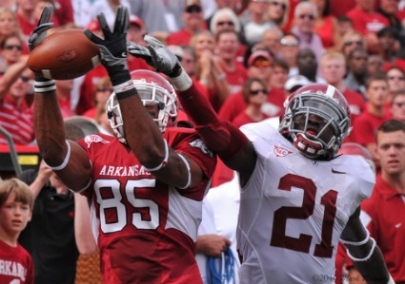 – WR Joe Adams turned in a 4.55 forty time which is a far cry from the 4.2 he told us he was going to run at the combine. We are still high on Adams, though. I was at the Senior Bowl and saw with my own two eyes that the man plays much faster than he tests. Scouts and other league types I have spoken with agree. That being said, he told reporters he hoped to lower his 40-time during continued private workouts.

– WR Jarius Wright rested on his laurels, opting to move forward with the 4.42 he ran in Indianapolis last month.

– LB Jerry Franklin did not receive a combine invite, but I was told he did well today in drills, showing adequate but not great lateral ability and footwork. He ran an excellent 4.6 forty time, but only put up 15 reps on bench press which would have been 2nd worst of all LBs at the combine. He did not seemed disappointed with his performance, though, telling reporters ““I was able to come out and show the scouts things I can do.”

– DE Jake Bequette rested on his 4.82 40-time from the combine, and did not participate in strength drills, (I can only assume) because of the same strained pectoral muscle that he told me was set to keep him from participating in the bench press in Indy. He assured all in attendance who cared to know today that he would have a private strength workout at some point prior to the NFL Draft. Bequette is an interesting prospect who I think may fit best in a 3-4 NFL Defense, but is not the type of physical specimen who can get by on athleticism alone. The good news is that he was one of the most intelligent prospects I had the opportunity to interview at the combine and was told by numerous sources that he was great in interviews.