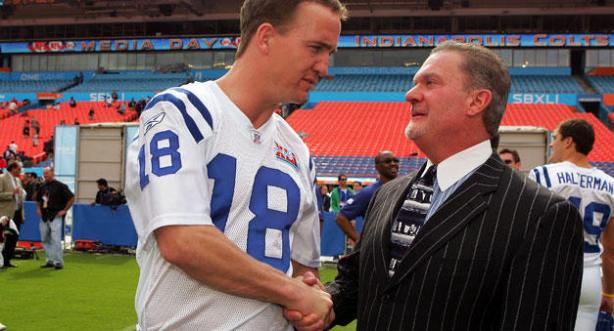 Recently, Indianapolis Star Reporter and Colts insider Bob Kravitz labeled Peyton Manning’s arm a “noodle”. Ouch! Hopefully its only his arm. Not good news for a guy who wants to throw footballs in the NFL again. If Peyton does make it back on the field the question becomes for which team?

About half of the league has pretty crappy QB play (I know, marginal would be a better way to say it-but that’s really how I feel). Pretty much any team that has an “unsettled” QB situation has to consider making a play for Manning. The caveat is Peyton will also have a lot of input on his final destination.

** Update 3/4/12 – Peyton Manning threw on the Duke campus yesterday and supposedly his arm is progressing. Amongst other scuttlebutt from the Combine that we will be piecing together, Manning’s confidant Jeff Saturday confirmed Peyton will be playing  somewhere next year. **

These are the odds of your favorite team landing Peyton Manning as I currently see it:

The rest of the AFC East will be in the race. Why not the Bills? Might as well drive the price up for Miami and New York. Its always fun thinking about Manning and Brady playing in the same division. The Bills have a decent team and Buffalo loves the “no huddle”. Ralph Wilson does have a history, making waves by landing Terrell Owens a few years ago. There is the whole hang up with the Ryan Fitzpatrick contract but the Bills do have a ton of cap room. Doesn’t seem like a great fit for Manning personally.
** Previous 1% – No Change

I think Houston is happy with their current situation and rightfully so. It would be such a GOOD fit though! Schaub’s health is still up in the air and you have to believe after battling Manning within the division all of these years that Texans management has immense respect for Peyton. Not a bad way to remove the “thorn” in your side.
** Previous 2% – This won’t happen but I like it too much to take them completely off the list.

There is always more than a 1% chance when it comes to Jerry Jones. The Cowboys seem pretty set with Romo but there is the widespread belief they are that “one player away”.
** Previous 2% – See Houston. Cowboys have been publicly reaffirming their love for Romo recently.

In a weak division with that defense Denver would be a nice fit. Feels like a destination Manning would enjoy. I’m sure it will cross Elway’s mind. Is it possible to overcome Tebow-Mania though?
** Previous 2% – No Change

I’m not sure Manning would be very interested but Mike Holmgren certainly might be. The only team in a tough division without legitimate QB play. Does the whole “west coast offense” thing matter?
** Previous 2% – I think Washington will beat them to RG3. They get Trent Richardson as a consolation and make a pitch to Peyton Manning and Reggie Wayne. Manning and Wayne would like to be a “package deal” and Cleveland really needs a QB and WR. With and emerging defense this is an interesting destination.

The Ravens may be the poster child for the “one player away” idea. Ray Lewis is on borrowed time. As much as he says he loves Flacco how could Lewis not support bringing Manning in? Heck, he might even push for it. There is a brewing contract situation with Flacco.
** Previous 3% – Ozzie Newsome thought I was an idiot for even asking. He still wouldn’t say no and I think they could use Manning more than HOU or DAL. The Ravens say they are in contract talks with Flacco and that they want him for 7 more yr. I’ll buy it when I see it.

Doesn’t sound like a likely destination but the Jags are far from settled at QB and have plenty of familiarity with Manning. I’m not sure how much that familiarity would play in to Manning’s decision. Does the big new Mustache in town want to make a big splash? I think Peyton would go to Houston to win but would he go to Jacksonville to crack Indy upside the head twice a year? A La Brett Favre?
** Previous 4% – We haven’t heard a peep about this and it seems very unlikely. The Jags need a QB badly. A destination where Wayne could land too.

The fact that they signed Kevin Kolb to a big contract last year could be a deal breaker. Larry Fitzgerald and Ken Whisenhunt have to be very interested. The weak division theory is also in play. #11 at WR and that dry heat would do wonders for his neck. Peyton would have to be very interested as well.
** Previous 8% – I still think it is a good fit but same as Jacksonville, I haven’t heard an ounce out of Arizona. Do they just have too much already tied up in Kolb?

I love this move the most. The Niners are the best fit. All the pieces are there and they could be scary good. I’m afraid last year’s results will obligate them to another year of Alex Smith.
** Previous 8% – It seems the 49ers are content with Alex Smith. Would still be a ridiculous combination especially if you throw in Wayne.

They went after Tarvaris Jackson last year and also signed Charlie Whitehurst to a big deal. But still? Feels very Pete Carrollish. He already has a decent defense. Even with the 49ers emergence this is still a weak division that would offer Manning playoff opportunities.
** Previous 5% – Pete Carroll gave me an “Ozzie Newsome” when asked about it. A big F#%K You. The same though he wouldn’t say no. I think his GM cap was on. Carroll did admit they have to look at upgrading the QB position. It’s clear Seattle is looking to make some big moves this offseason. Seattle is a sleeper destination on the rise.

The Dolphins will probably be pretty avid in their pursuit of Manning. They should be, they would be pretty good with him. I just don’t see it. I don’t think Peyton will have any interest in playing with Brandon Marshall. Manning is the king of stability and the Dolphins franchise has been anything but since owner Stephen Ross took over.
** Previous 6% – There is a lot of momentum for this move. Brian Billick gave the most compelling arguments as to why this won’t happen. Bottom line, the new head coach in MIA won’t want this headache tied to his job but the Dolphins desperately need a top shelf QB.

Feels like a sleeper destination that you won’t hear anyone talk about. A relatively talented roster with plenty of offensive weapons. Also in a weak division. Great football town and this wouldn’t be a first, there was a guy named Joe Montana.
** Previous 5% – My favorite sleeper destination for Manning on the rise. The Chiefs have a pretty stacked team otherwise in a very winnable division. Coach Romeo Crennel admitted at the combine “he would be crazy not to look at Manning.”

Dan Snyder! Being in the same division with Eli would be downright nutty!
** Previous 11% – I think ultimately the ‘Skins decide they would rather have RG3.

Good fit that would instantly make the Jets much more legitimate Super Bowl contenders. The Tom Brady factor. They did it with Favre. Is New York even big enough for two Mannings? This would be an absolute riot.
**Previous 13% – GM Mike Tannenbaum came out publicly and very clearly said the Jets will be closely examining the QB position and looking at ways to upgrade if possible.

The circumstances indicate Manning probably won’t be back in Indy next year but I still think the Colts are the front runners. Peyton Manning staying in Indy puts my mind at ease. He belongs there and has maintained all along he wants to retire there. The Colts have already paid him a boatload of money. There has been some strife that would have to be put to bed. If Peyton truly is willing to re-do his deal and if all other things were equal I would put this at closer to 50%. The difference? I think some team will be willing to offer Manning a multi-year deal, possibly even three years. The Colts are going to want to keep this contract short and Peyton will likely pass on the opportunity to rebuild.
** Previous 19% – With Manning throwing and apparently looking pretty good this may give the Colts an opportunity to have more information about Peyton’s health when making a decision. It seems like this gap has been bridged a bit. I think the Colts do have at least a 1/5 chance of keeping the “Sheriff.”

When your arm is still a “noodle” after a full year off this is a real possibility. Manning is tenacious and his competitive spirit should drive him to play but I don’t think he will be willing to embarrass himself if he knows he can’t do it. The Jets or Redskins will probably make sure this doesn’t happen.
** Previous 9% – This was looking more likely a few weeks ago. I know Jeff Saturday says Peyton is definitely playing next year but until we know for sure retirement is still a possibility.