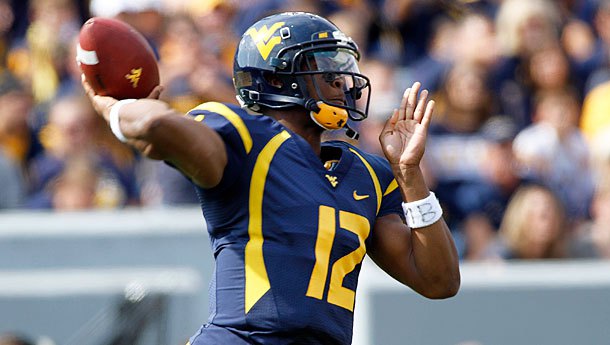 Geno Smith has good size and experience. He speaks with high character, intelligence, and leadership ability. The most key aspects of quarterbacking, along with accuracy. Which he happens to be pretty good at too, consistently throwing for 65-75% completion over his career. He takes very few sacks and has an amazing 5.6:1 TD/INT over the last two seasons. Check mark for decision making.

He isn’t in the RG3, Cam Newton, or Andrew Luck class, not many are. NFL Teams will be much more comfortable grading him in the Jake Locker – Ryan Tannehill – Christian Ponder – Blaine Gabbert range. That could be a mistake, he is better than those guys. All but maybe Tannehill. He does have question marks but coming out of a volume pass offense, he is clearly the best QB prospect in this draft.

Draft position is relative year to year. While recent history tells us Smith is a Top 10 guy, not a Top 3 guy; he looks to be a great fit for the West Coast Offense. No matter what smoke signals are sent from the teepee, if the Chiefs are unable to trade out of the #1 pick, Geno Smith will be in the fold to be the first pick in this draft. Here are my scouting notes on Smith from four different contests:

vs. Oklahoma 2012:
3 step drop is good – velocity flick of wrist good – makes nice throw deep middle – good arm strength – broken up by OU DB Colvin – throws slow developing telegraphed slant – stared down receiver, again OU DB Colvin (who reminds me of Asante Samuel) picks him off – quick sideline comeback beautiful throw to the sideline vs tight coverage only his man can catch throw is before receiver comes out of break – does not have happy feet nice drop and settles down – sometimes ends up w/ feet parallel pointing towards endzone and a bit flat-footed but still generates decent power – will need to step into these throws at next level. Throws too many balls high. A lot of quick timing routes – throws a nice sideline deep ball with touch and velocity – has missed a few times deep middle. Would like to see more NFL Power throws: deep out, deep dig, deeper crossing routes, etc.. – based on deep ball, velocity, and shorter timing throws it seems he should be able to do this – Good mobility does not look to have huge game breaking ability as a runner not an electric RG3 type runner/athlete

vs. Kansas State 2012:
Blowout – Kstate playing the pass with the lead – throws bad interception where he is locked in and baited underneath by zone coverage – nothing down the sideline

vs. Clemson (Orange Bowl):
Polished in pass heavy offense – WVU blows them out – shows deep middle seam throw – has lots of redzone touch: slant, back shoulder, curl – not fast on his feet but threatening mobility – hits sideline route deep wasn’t an amazing throw to a wide open WR (by NFL standards) but it connected – good arm strength on the roll out.