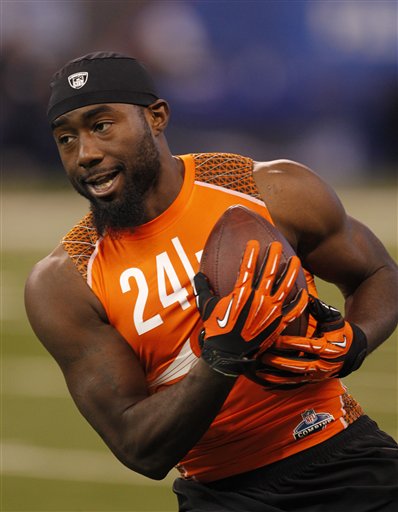 Photo Credit
The rich just keep getting richer it seems. The loaded Pittsburgh Steelers just signed fifth round value pick Chris Rainey to a four year deal. The talented Rainey can do it all, serving time at tailback, receiver, and kick returner in his time at Florida. His multifaceted prowess on field reminds me of fellow Florida alumnus Percy Harvin. Except Rainey blocks kicks (Six to be exact, a Florida record). You have to be pretty tall or fairly quick to accomplish such a feat. Rainey is 5’8″. The kid breezed by defenders in the SEC, the fastest conference in the land, which means he’ll probably be fast in the pros. Head coach Tomlin knows this, as does OC Todd Haley who is probably eager to involve a player who on paper resembles Dexter McCluster, a weapon whose potential he was just beginning to tap in Kansas City. It’s too early to tell how much we’ll see Rainey on game day, but you have to imagine he’ll at least be a situational  threat, which means more and more these days as the every down back is moving to the endangered creature list. Dynasty leaguers, and quite possibly re-drafters, should keep an eye out for Rainey come the new season. If he’s even half as valuable as a Percy Harvin, he could be worth a flier.