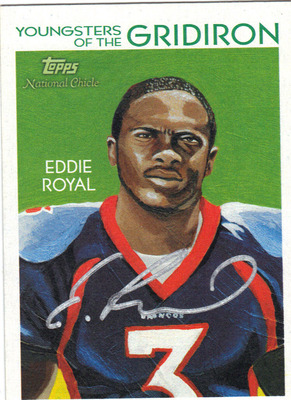 Eddie Royal has a new lease on fantasy football life in San Diego. It is reported that head coach Norv Turner is depending on the speedster to absorb a lot of the short targets that were going to running backs in the past. This is no insignificant amount, as no less than a fourth of San Diego’s pass attempts were to running backs last year. Royal has been a shadow of his former self since his rookie season where he gained almost 1,000 yds and 5 tds, but Turner seems intent on making him a focal point of the offense.

There is no dearth of talent at the receiver position with Vincent Brown, Robert Meachem, Malcolm Floyd, and Antonio Gates at tight end, but Royal fills a particular niche that these guys can’t. He’s a great option route runner and the Chargers love the option.  Royal has always had play-making ability, let’s just hope he can fulfill his potential this time around. I see him as a mid to late round flier with decent upside, especially in PPR leagues.