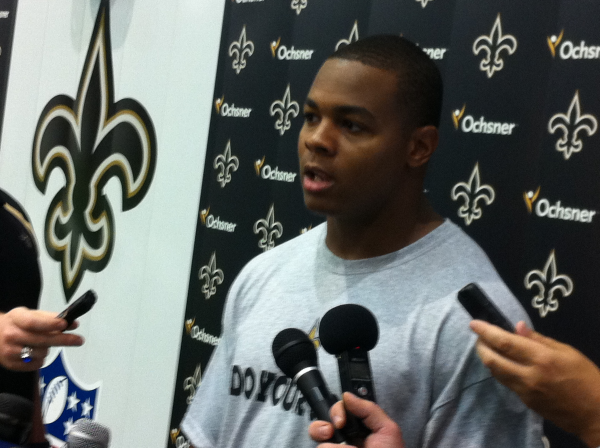 Here is the snap breakdown for the Saints running backs on day 2 of training camp. We charted 45 first team snaps.

Darren Sproles – 33%
The second most impressive player of the day behind Jimmy Graham. He jumps off the field at you and is so fun to watch. Sproles was in for 15 first team snaps, he came out in two back no TE, two back one TE, one back one TE, one back two TE. Of course, their is more trickery involved when with Sproles in. A lot more motion. A lot more spreading out the field to creat space and matchups. Sproles will be heavily involved again this season.

Mark Ingram – 15%
Has the sleekest build of all the running backs. He looks the part, obviously. Ingram only took seven first team snaps, though. Almost exclusively out of two back, one TE sets. He also looks to be on a “pitch count”. Ingram was absent from the last portion of pratice. We saw him on the bike for quite a while. We asked interim head coach, Joe Vitt, about this after practice. He says Ingram is a 100% healthy and this is and has been standard operting procedure with him. Vitt then went on to cite a laundry list of Ingram’s previous injuries, in an almost “yawn, roll your eyes” fashion:

Travaris Cadet – 2%
Cadet caught our attention with the second team. He came in for one snap with the first team when Ingram exited. Looks like a promising young player. I asked offensive coordinator, Pete Carmichael, about Cadet after practice. He smiled and said he though Cadet looked really in good in the passing game out of the backfield.