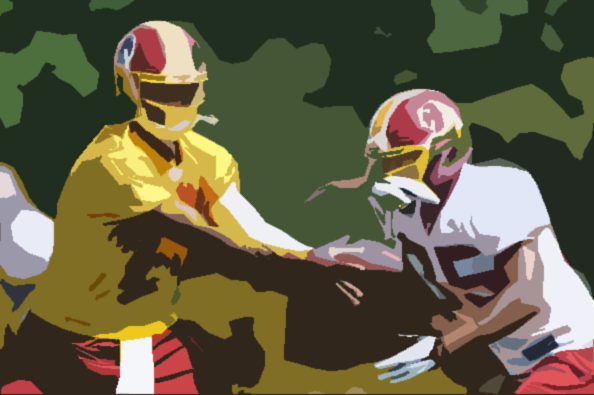 Nestled somewhere between the fan crush that fantasy columnists have for Roy Helu and the man crush that Redskins head coach Mike Shanahan has for Tim Hightower stands the truth that is second year RB Evan Royster.

It has been Royster, not Helu, who has been taking snaps with the first team since Washington began training camp Thursday morning, while Hightower continues to recoup from his 7 month old ACL surgery. Helu has been playing with the second team, an indication that the staff doesn’t see him as an every or early down back. I have to admit, I’ve overlooked Royster. Helu dazzled with suprising burst and vision when he came on the scene last year, and he was the kind of “come from nowhere” player that the Trashman loves to plug and play.

It was Royster though, who finished the season starting for the ‘Skins with a 113 yards on the ground and 52 in the air during Week 17 against the Eagles. The former high school lacrosse standout and Penn State all-time leading rusher looks like he’s taking that momentum into the 2012 season. And though Hightower projects to get the first crack at the starting job come game time, if he’s healthy, Royster could end up being the go to guy sooner than later.

After all, no one believes Hightower will make it a whole season on that leg, and Helu just can’t seem to stick as the lead runner. We’re still waiting for the dust to settle, and we hate owning Shanahan running backs, but our eyes are on Royster as the early candidate to lead Washington in yards. He’s worth a roster spot in all fantasy leagues.