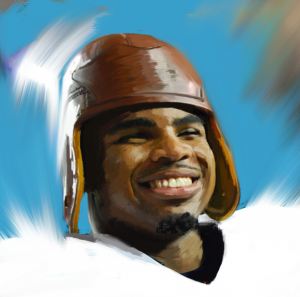 2011 Season (including Maaco Las Vegas Bowl)
– In 12 games Martin ran the ball 263 times for 1299 yards and 16 TDs. He added 28 catches for 255 yards and two more scores.
– Martin scored at least one TD in every game he finished in 2012. The only team holding him without a score was UNLV in game he exited due to a minor leg injury after only 6 carries.
– Ended his college career with a 301 all-purpose yard, 2 TD monster in the Maaco Bowl Las Vegas against Arizona State.

Style
Martin obviously reminds you of the Michael Turner/Ray Rice/MJD- “bowling ball” type of back on the surface. If you watch Martin’s tapes from the season, you will notice a few differences, though. He’s a straight line, disciplined runner. He rarely gets tricky with bounces outside unless truly forced to. In this way he reminds me more of Frank Gore. Gore is the same way psychologically as a runner, and is around the same size as all the aforementioned backs, but like Martin, holds his weight a little differently. Mark Ingram is another candidate for comparison to Martin in this way. They are all approximately the same size, build and speed. Gore runs with a forward lean and a “prowling” gait on the balls of his feet as he gets up to full speed, an attribute that Martin lacks.

Boise’s offensive line is very good traditionally, and this year was no different. While they were better known for their pass protection (#1 in the FBS for Adjusted Sack Rate) they are quite a run-blocking force as well. Keeping talented QB Kellen Moore upright and on point is an important factor in Boise’s game plan, and utilization of Martin. It requires the defense to always account for play action, opening up easier lanes through level one when the ball is indeed handed off. Also remember that the average rank of opposing run defenses that Boise faced in 2012 is just under 74, placing the average level of talent faced by Martin weekly around the level of Miami (OH), North Texas and Tulane.

I can’t wait to see him against more stacked competition in the Senior Bowl. For now, I really like Martin, and the idea of what he brings. He has the beginnings of a skill set that has proven time and time again to be more than serviceable at the NFL level, and he is a smart player who has played with smart players.