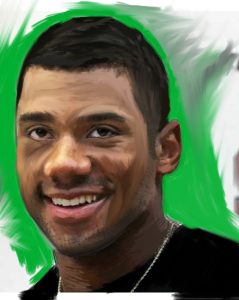 Russell Wilson is a seasoned guy at 23 years old with quite a bit of experience. He redshirted at NC State in 2007, started the next three years, played baseball, and graduated. In 2010 he was then drafted by the Colorado Rockies and experienced professional sports while playing in the minor leagues. Having one year of eligibility left, Wilson returned to football with the Wisconsin Badgers last summer. He won the starting job in short order and took the team to the Rose Bowl. If that isn’t good enough, he is mature and answers media questions perfectly while projecting humility.

In high school and at NC St., Wilson ran a lot of plays that were designed for him to get out of the pocket and throw on the move and he is very good at it.  At NC St. he ran a lot of shotgun but we did get to see a lot of snaps under center at Wisconsin in a more pro style offense. Russell Wilson spins the ball very well and can make all the throws. He likes to throw it down the field but has shown the ability to throw in windows and make touch passes to the back shoulder. Wilson also demonstrates above average footwork and is pretty good at setting his feet. He has consistently been a 3,000 yd. passer/ 300 yd. rusher who throws for 30 td., runs for 5 td. and has better than a 2:1 TD/Int. ratio. These numbers held up against much better competition in the BIG Ten. Wilson’s accuracy improved dramatically at Wisconsin to over 70% and he threw and an astounding 8:1 TD/Int. ratio.  Most importantly, Russell Wilson passes the eyeball test as a very legitimate QB prospect