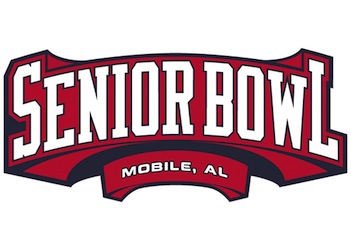 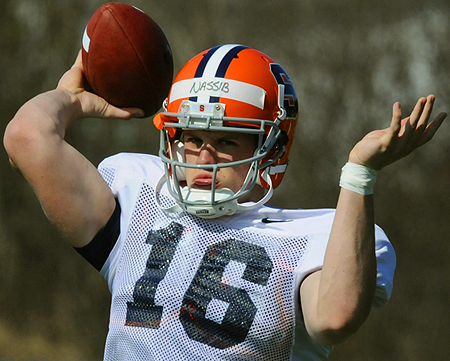 Boy, this is going to a great Senior Bowl if you like quarterbacks. This year’s crop is chalk-full of big, strong-armed, athletic passers. Ryan Nassib may be the most NFL ready of all of them. At Syracuse, he was a disciple of Bills new head coach Doug Marrone and Nathaniel Hackett, son of longtime NFL quarterback guru and passing coordinator, Paul Hackett. Nassib is well versed in an NFL system and comes to the Senior Bowl as one of the more polished products.

In both 2011 and 2012 Nassib registered exactly a 62.4% completion percentage while amassing a cumulative 2.5:1 touchdown/interception ratio. Terrific and consistent numbers. Coming from an NFL system, he has the most pro-style throws on tape of any of the Senior Bowl quarterbacks (Landry Jones is close). NFL teams love being able to project players. They like seeing throws on tape that translate. Nassib has plenty of them in the pocket and on the move.

His biggest issue is the inability to change the speed of his ball. He has a very strong arm and is capable of all throws, but his passes aren’t necessarily always the most catchable. He almost always throws his fastball. His attempts at touch passes are inconsistent, some good, some not. This issue will be mitigated with NFL talent at receiver. If the ball is there, they are paid to catch it. Still, Nassib must work on adding a few change up pitches.

As for pocket presence, Nassib’s sack numbers are light years better than several of the other quarterbacks we will see in Mobile. He’s been sacked a modest 45 times over the last two seasons.

Ryan Nassib may be a top three quarterback selection in this year’s NFL Draft. You can bet he will be off the board by Day Two, probably earlier than later. The Bills should have the inside track, given the coaching staff’s familiarity, the team’s need, and their draft position. Hopefully for Bills fans they can wait until rounds two or three before making this pick. If his former college coach passes on him, consider it an indictment.