The Guy Who Made the Most Money at the 2012 Senior Bowl – Michigan DT Mike Martin
Alex Dunlap, Rosterwatch.com 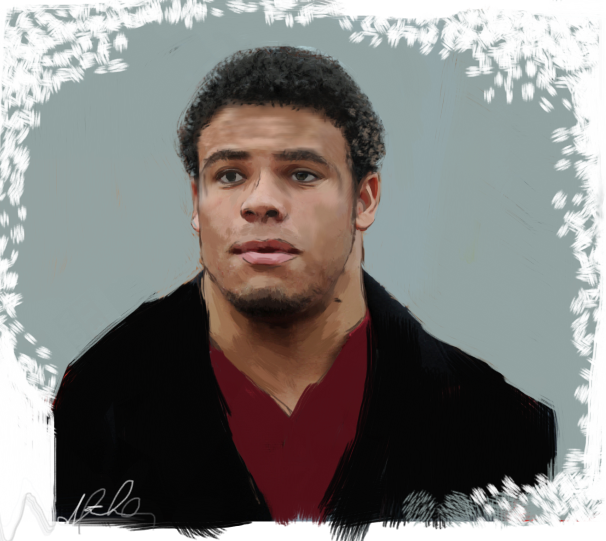 You could make a case for Arizona WR Juron Criner, who came on later in the week once the pads went on, and looked like an Anquan Boldin target-hog in the Wednesday practice and Senior Bowl Game. He made himself a lot of money this week, and he should most certainly be elevated on everyone’s draft board and fantasy football dynasty league and possibly even 2012 redraft radars. If he runs well at the combine, some people think he could even jump into Kendall Wright territory. High first round pick. Obviously, we have a long draft season but this is a tremendous start.

But let me tell you now. Michigan DL Mike Martin is a beast. He plans on breaking the NFL Combine record of 49 reps on bench press later this month. We were at the bar watching the AFC Championship during the NFL’s welcome reception during Senior Bowl Week when Martin walked through. Byron and I both said the same thing- “this guy looks a like a freaking bear-who is he”? At the National Scouting Weigh-in, there were four players who stood out above the rest based on freakish physical stature alone; these were Texas LB Keenan Robinson, Alabama DE Courtney Upshaw, Boise RB Doug Martin and of course Mike Martin. Martin is not as tall as some teams would like, but he has the sturdiest 6’1″ 307-pound frame you can imagine. He’s a former wrestler, and uses his leverage like a monster against double teams. He’s a 2-shade nose that gets deep penetration on virtually every snap and shows an excellent motor. He has uncanny hole awareness and uses his positioning to make tackles that others would simply give up on. He is a nightmare for opposing linemen in the trenches, but also represents a nightmare for opposing backs to scout tape on because of his adept, seemingly natural ability to never let plays develop in the same gaps consistently.
During the week of practice, the Senior Bowl is a convention for media, agents, scouts, NFL owners and GMs and NFL assistant and head coaches. Playing on a D Line that was getting orders barked at it by Vikings LB Coach Mike Singletary, Martin shined as he did in the game. He interviewed so well that every single scout I talked to could not say enough great things.
I came into the Senior Bowl not knowing a thing about Mike Martin, and based on his tapes- would have graded him as a 4th-round prospect. In my latest Mock draft, I have Martin going early in the 2nd round to the Kansas City Chiefs, who are in dire need of interior help on defense and an additional running back.