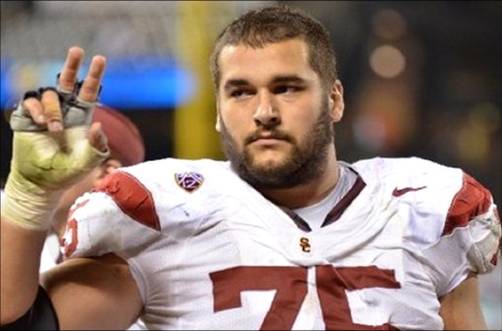 Former USC head coach Pete Carroll says he has “great length.” Draft guru Mike Mayock calls him “lanky.”  Are we splitting hairs? The Minnesota Vikings might be. Rumors have emerged that the Vikings are not set on selecting USC left tackle Matt Kalil with the 3rd pick of the NFL Draft. For the last 60 days this selection has been considered a stone cold lock by draftniks and pundits alike.

You can’t buy in too much though, because this is the season of reverse tells in a very rich mans’ game of poker. A game that uses humans for chips. Heck, Minnesota may just be doing their due diligence by tossing a little feeler bet out there. That said, there could be some legitimacy to the discussion.

Recently, Pete Carroll and Mike Mayock expressed different views about Matt Kalil as an NFL prospect. According to Coach Carroll, Kalil is “everything he’s billed to be, he’s big time.” “He’s tough, he’s smart, and he understands the game. There is nothing to keep him from playing right away. He’s going to be a terrific player.”

While Mayock speaks highly of Matt Kalil and considers him a top prospect, he’s not quite as sold. I asked Mike to compare him to Joe Thomas and Jake Long. “He’s very good but I cannot put him in that class. He lacks the core strength those guys possess. He also falls asleep on occasion.”

These varying perspectives lend themselves to the Viking’s conundrum. It’s nice to get a sure thing but the fact is if you aren’t getting Joe Thomas or Jake Long with the 3rd pick in the draft it does become a curious situation.