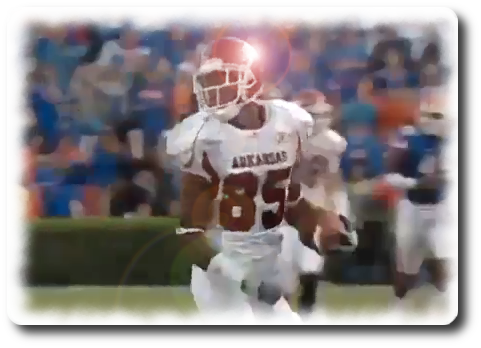 If you listen to him the answer is definitely “yes.” A fourth round pick in the year’s draft, Vikings rookie WR Greg Childs has recently dubbed himself “ the steal of the draft.” That may be going too far but I like his chances to contribute.

The first question is why then did he slip to the 4th round? Childs suffered a torn patella tendon during his junior year. Admittedly, he probably came back a bit too fast as a senior, causing his draft stock to fall. Going back and watching his play while healthy I saw a big physical receiver with strong hands. His combine measurements match the description at 6’3” 219 lbs with 10” hands. On film, Childs uses body control and positioning to high point balls and then demonstrates powerful run after the catch. I immediately thought of Anquan Boldin.

Upon further examination though, it’s evident that Childs is a bit more of a perimeter receiver than Boldin. He plays more on the edge but is clearly capable of going over the middle. Guys like Dwayne Bowe and Marques Colston start coming to mind. All pretty good company considering Boldin, Bowe, and Colston each had very productive rookie seasons in the NFL. Like Childs, each of the aforementioned receivers ran 4.5+ in the 40 and typically put up college stats in the 50 rec., 700 yd., 7 td. per season range.

Instantly, Christian Ponder runs through your head and you wonder how Childs can be valuable in that situation. Well, Colston did have Brees, but Boldin played his rookie year with Jeff Blake and Josh McCown while Bowe played half his rookie season with an old walking concussion named Trent Green and half a season with Damon Huard.

One area where Greg Childs can improve is his blocking in the run game. He was hit or miss in that area at Arkansas and that will be crucial to him staying on the field in Minnesota where running the ball is the priority. The good news is, he has shown flashes as a blocker and that is a skill that can be improved upon via coaching and hard work. He will also have to compete with his former college teammate Jarius Wright for playing time. [Although Wright is more of a slot guy and there is a huge void at receiver in Minnesota.] Throw explosive WR Percy Harvin into the mix to open things up and I see Childs potentially being a very effective and physically imposing compliment to the Vikings WR corps.