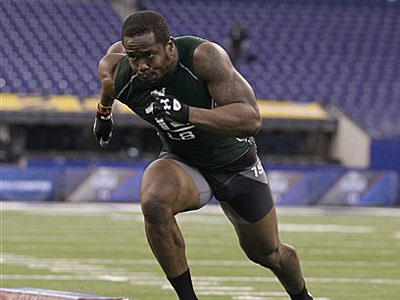 Texas A&M Nation’s most visible face in the National Football League today is Von Miller of the Denver Broncos. He has been filmed on many an occasion giving the “Gig ‘Em” sign to national NFL coverage cameras, as well as during interviews. According to his agent, Miller is now helping his alma mater in a more behind-the-scenes manner this week, returning to the Athlete’s First Compound in L.A. to train with former Aggie teammates and current Athlete’s First clients Jeff Fuller and Cyrus Gray.

We caught up with Fuller at the Senior Bowl regarding his lackluster production during his final year at Texas A&M. (He was hurt. Pretty bad.) Listen to the audio here: Jeff Fuller Interview

As far as Cyrus Gray, he was sent home from the Senior Bowl after having failed his physical. This was due to a lingering issue pertaining to his collarbone injured in the second-to-last regular season game of his college career. Let me point out that the Senior Bowl is a diligent, cautious entity that put it’s athlete’s health and safety above all else. Ask Michigan State TE Brian Linthicum. He had to sit out of practice the 2nd day. I asked him why, and he said “Man, they’re super careful here. Its just a bruise.”

I was told by their agent this afternoon that Cyrus is ready to go and will be participating in all the drills. I view Cyrus Gray as a candidate who has been much overlooked during this draft process, and if he can turn in measurables highlighting his explosive potential in Indianapolis next week- I see him moving up draft boards to the same territory Doug Martin and Isaiah Pead are currently being slotted at in many industry mock drafts.