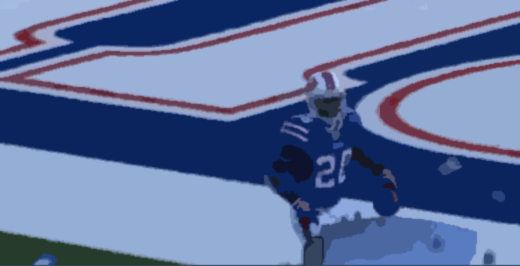 It’s not an indictment to be on either list. Nor is this a directive to do anything rash. We are strictly looking for value as we try to increase the player equity on our teams. As you continue to build that value in Week 3, you should be looking for proper deals on these players.

Buy of the Week: Premium Quarterback

C.J. Spiller, RB BUF
Spiller has the job on lockdown. He looks amazing, just as he did averaging 15 PPG over the final six games last season. His value is currently in the stratosphere, but there are still a few question marks long term. At minimum, a cursory review is in order here. First round talent or a whole bag of goodies in return is a distinct possibility.

Reggie Bush, RB MIA
You won’t ever be able to sell higher than this. Your feelings won’t be hurt if you have to keep him. There are concerns about his team and his durability.

Willis McGahee, RB DEN
He is the real deal. You are in no hurry to move him. Coming off a monster game, one that could be his best of the season, this is a week to explore your options. Maybe you can consolidate him and lower tier player for a premium guy. Or, if you can trade him straight up for someone you consider better that you can buy low on, it’s worth a look.

Frank Gore, SF RB
It’s worth seeing what you can get. Typical Gore concerns moving forward.

Kevin Smith, RB DET
Last week seemed rough, but he still had 70 yards against a stout 49ers defense. Mikel LeWHO? That would be your sales pitch to a needy owner. Smith owners face the prospect of diminishing returns as the season continues. His value may have topped out.

Mark Ingram, RB NO
He is a decent option with minimum upside. Lacking consistency in a three-way backfield his production is hard to predict. Coming off of a team high 16 carries and touchdown, this is a great opportunity to move him. There are a probably a couple of guys in your league excited about him because he is the “goal line” back.

Pierre Thomas, RB NO
A different role in the offense than Mark Ingram, but the same instructions. He put up 143 yards last week. It’s worth seeing if you can get anyone lathered up about that.

Dwayne Bowe, WR KC
He’s good but his value is high right now. Maybe you can get an upgrade?

Mike Williams, TB WR
Touchdowns two weeks in a row. Maybe this conjures images of the old Mike Williams for one of your league mates. Remember, William is a clear cut #2 on a run-first team these days.

Matt Stafford, QB DET
Averaging only 11.9 PPG. This a great time to swoop in and steal a player with big upside.

Aaron Rodgers, QB GB
Averaging 16.75 PPG. Not too shabby, but low for a 25 PPG guy. Hey, if you can get a discount on the best player in the league it’s worth a shot.

Tom Brady, QB NE
Averaging 16.2 PPG, Aaron Hernandez went down, and now Welker-Gate. He can win you the season. Take a crack.

Tony Romo, QB DAL
Coming off a poor performance vs SEA. People tend to jump off the cliff pretty quickly (and usually hastily) when it comes to Romo. He is a good QB option.

Darren McFadden, RB OAK
I’m genuinely worried about him in the zone blocking scheme on a bad team. Still, coming off of a very disappointing 4 point game vs MIA and averaging under 8 PPG so far this season, his value is exceptionally low. When things are going right McFadden is elite.

Matt Forte, RB CHI
Maybe you can get a little discount because of injury concerns and Michael Bush’s role.

Ahmad Bradshaw, RB NYG
The neck injury; but he’s always a little bit hurt. The Giants just don’t have many other options.

Chris Johnson, RB TEN
It doesn’t look good. Johnson is not the same guy. Maybe his owner has come to that realization and you can do a fair deal. If you have the extra pieces to ship away it is worth a look. Johnson is still one of the few RBs that gets all of the action. He would be a good 2nd RB or a great 3rd RB or Flex.

Peyton Hillis, RB KC
He’s been bad so far. Owners have to hate him. Charles won’t be right all season. Hillis has nowhere to go but up. The opportunities will be there.

Beanie Wells, RB AZ
Another slow start. Another bad Cardinals team. Ryan Williams looks pathetic though. When Wells is full speed he’s flashed big upside. He has all of the physical talent in the world. At the least, I see him on the talented side of a two back committee with goal line responsibilities.

Calvin Johnson, WR DET
Averaging 10.25 PPG. Maybe you can get a discount on one of the best fantasy options there is.

A.J. Green, WR CIN
Averaging 9.4 PPG. Same situation as Megatron. I still love him as the #2 WR on the season when it’s all said and done. Brandon Marshall and Julio Jones might argue with that.

Wes Welker, WR NE
It was a lack of targets in Week 1. It was a lack of snaps in Week 2. In the long run he is still a very solid option on a very good offense. The Aaron Hernandez injury certainly helps Welker’s short term prospects.

Larry Fitzgerald, WR AZ
I truly believe he is only a high upside #2 WR this year. Averaging only 3.35 PPG on a horrific offense through two games probably has a lot of owner panicking. We are still talking about Larry Fitzgerald, though. If you have extra assets it would be nice to swing a deal that makes Fitzgerald your #2 or #3 WR.

Hakeem Nicks, WR NYG
With the news that he will miss the Thursday night game, this is worth a look. Coming off of a huge performance it’s hard to imagine a fire sale but you might have an owner in your league who is in a Thursday night bind at WR.

Greg Jennings, WR GB
A supremely consistent option there have been concerns about a changing role for Jennings since last year. 3 points in Week 1 and a groin injury kept him out of Week 2. I’d throw a little bait out and see what might be lurking.

Dez Bryant, WR DAL
29 games into his career he has still never scored a 20 point fantasy game. Averaging only 5.13 PPG so far. Kevin Ogletree has emerged and there are only so many balls to go around. Owners have to be worried. Unquestionable talent and big upside if he and the Cowboys can put it all together.

Torrey Smith, WR BAL
Averaging only the 6 PPG that owners can pick up off of the waiver wire. Baltimore’s offense is good and Smith is poised to breakout with some big performances.

Justin Blackmon, WR JAX
2.2 PPG, Ouch! He is the most talented WR they have. Hopefully, as MJD gets going things will open up for Blackmon. We think Gabbert has taken a step forward to become at least a semi-respectable NFL passer.

Aaron Hernandez, TE NE
He’s hurt for a while. Hey, if you have the pawns and the room on your bench he’s a great stash.