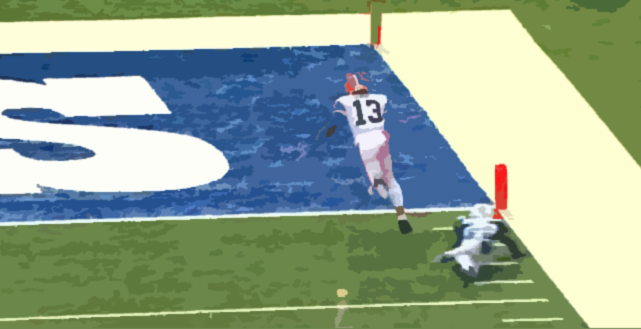 No, these guys aren’t waiver wire p but there’s a good chance you’re hesitant about starting them this week. Don’t be.

Josh Gordon WR, Browns: Gordon has been very reliable as of late, and draws a matchup with a Redskins team that allows big plays, which happens to be Gordon’s specialty.

T.Y. Hilton WR, Colts: As we saw on Monday, Houston is very suspect against good passing teams, which Indianapolis is. Raggie Wayne will be covered up, leaving Hilton and Donnie Avery to run wild. Hilton is the more talented of the two, and will go big. Trust me.

Cecil Shorts WR, Jaguars: He’s baaaacck! Shorts is exhibiting no more concussion symptoms and should be ready to go against Miami. He’s always one big play away from a fantasy monster, and he always gets that play.

Benjarvus Green-Ellis RB, Bengals: The Law Firm has averaged over 100 yards over the last four games, and will face a lame Philly front. There are bigger names you could start this week, but the proof is in the pudding.

David Wilson RB, Giants: Ahmad Bradshaw is doubtful this week, and Wilson is on fire! I still can’t believe he’s only owned in 30 percent of leagues right now, especially after breaking a team record for all purpose yards. He will feast on a weak Falcons run defense.

Reggie Bush RB, Dolphins: Don’t look now, but Bush is back on the scene. He must have realized that he needs to look good to other organizations for any chance of getting a good deal next season. Don’t be afraid to start him versus a mediocre Jaguars squad.

Tampa Bay Defense: They face Drew Brees this week, and though I would not normally advise the start, Brees has been a turnover monster in the last few games. They will pressure him, and he will make mistakes.

Tony Scheffler TE, Lions: Scheffler didn’t rack up yards last week, but he did get in the end zone which is more than I can say for many tight ends last week. He will be a solid play again against a reeling Cardinals cheerleading squad. Scheffler is the biggest fantasy beneficiary of the Ryan Broyles injury as they use him out of the slot.